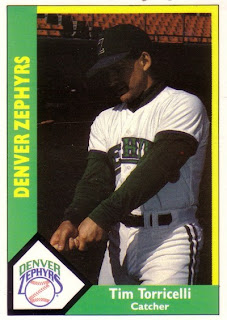 Tim Torricelli never hit well in his four years in the minors. But that wasn't the most important thing for the catcher, told The Florida Times-Union years later.

''When you have a good catcher defensively - and he hits - well you've got a heck of a player," Torricelli told The Times-Union in 1997, as he served as a coach for the Jacksonville Suns. "To me, the most important thing about a catcher on a good club with a good pitching staff is that he has to have good rapport with the pitchers and has to have the respect of the players as well, because he's really the captain of the field.''

Torricelli spent his four seasons in the Brewers system, signing with the team for 1987. He started that year at single-A Stockton, catching for the Ports.

Torricelli hit .224 for the Ports with three home runs. One of those home runs came in an August game against Modesto. Torricelli hit a two-run shot just inside the left field foul pole. Also hitting a two-run home run in that game for Stockton was Gary Sheffield, according to The Modesto Bee.

Torricelli also had a two-run single in a May game, making up for base-running miscue earlier, The Bee wrote.

He hit .212 in his final games as a player, his career ending without making the majors.

It was while managing at Jamestown in 1998 and coaching at West Michigan that Torricelli oversaw the development of young Brandon Inge and Inge's move to catching.