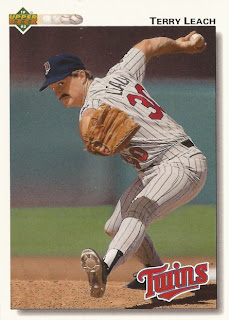 Terry Leach started off 1987 hot. Mainly a reliever, he hadn't won more than six games in four prior seasons - total.

But in 1987, he switched to starting in early June, already with three wins, and by early July he had won his seventh game. All of that against no losses.

"I'm just happy to be where I am right now," Leach told The Associated Press after that game. "Things couldn't be better. I didn't think it (the winning streak) would last as long as this."

Leach went on to post an 11-1 record with the Mets that year, with a 3.22 ERA. His career would continue through 1993, playing with the Mets, Royals, Twins and White Sox in a career that spanned a total of 11 seasons.

Leach's 1992 Upper Deck card came in one of my Dollar Tree repacks I picked up a few weeks ago. I figured I'd go back to a Dollar Tree pack after a few days of Christmas '86 Topps and '87 Donruss packs. 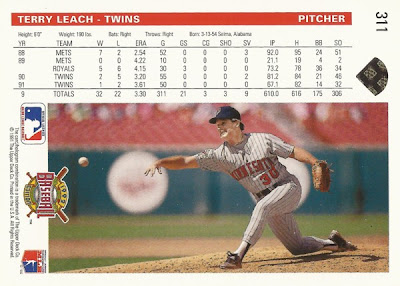 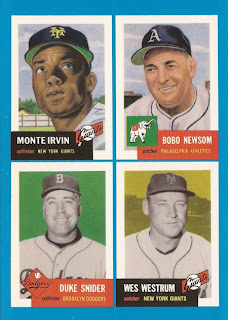 This Dollar Tree pack didn't uncover any members of the CMC set, but there was a player who was traded for two members. There was also just one Hall of Famer, appearing on a Topps archives quadracard from Bazooka. The card itself appears to be from 1992.

The Hall of Famer was Duke Snider. Snider appeared on the card, along with fellow 1953 Topps set members Monte Irvin, Bobo Newsom and Wes Westrum.

Irvin played eight seasons in the majors, mostly with the Giants, previously playing in the Negro Leagues and served in the Army during World War II, according to his Baseball-Reference Bullpen page.

Newsom is described on his Bullpen page as "one of baseball's colorful characters." He also played until he was 45. Westrum played 11 seasons for the Giants, going on to manage the Mets and the San Francisco Giants. Westrum was also the subject of a Night Owl post last month related to Westrum's 1956 Topps card and a note written on the card front.

Snider, of course, played for the Dodgers for 18 seasons, making the Hall of Fame in 1980. 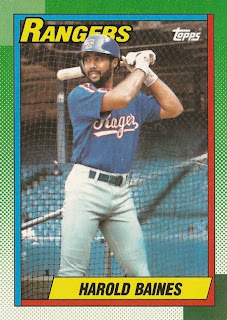 The guy traded for a couple CMC set members was Harold Baines. Baines was sent to the Athletics in August 1990 for two players to be named. Those players were CMC set members Joe Bitker and Scott Chiamparino.

Baines' card back notes his uniform number was retired by the White Sox in 1989 after 10 seasons. He played until 2001. 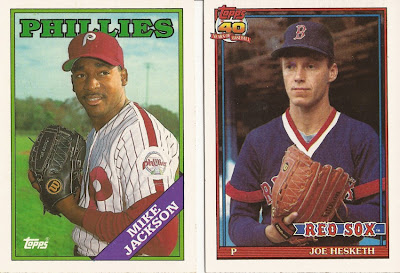 Mike Jackson and Joe Hesketh just have interesting blurbs on the backs of their cards. On the back of Jackson's 1988 Topps offering we learn that his hobbies included swimming, dancing and fishing.

Hesketh's blurb on his 1991 Topps card shows his dedication to his family and his team. According to Topps, Hesketh flew to Florida for the birth of his son Aug. 3, 1988. He then flew back to Pittsburgh, where his Expos were playing the Pirates. Hesketh pitched the eighth inning.

I've gotten two of these particular repack packs, a foil pack containing 15 mixed up cards. I've gotten one of these Baseball America prospect cards in each. Apparently, they're the "Rookie minor league cards in every pack" referenced on the wrapper. 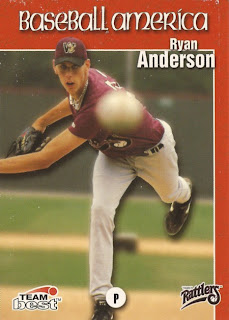 This guy, Ryan Anderson, was selected in the first round of the 1997 draft, his card back reads. He also reached 99 mph on the radar gun in his first season in the minors. Anderson reached AAA for the Mariners in 2000, but didn't reach the majors.

According to USA Today, in an article linked off of Baseball Reference's Bullpen, shoulder injuries ended his bid for the majors. Anderson instead brought his heat elsewhere, the paper wrote, to the Scottsdale Culinary Institute, a cooking school.

"This is the Harvard and Yale of culinary, and I'm loving it," Anderson told USA Today in June 2006. "My focus isn't on baseball anymore."