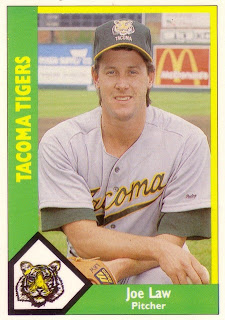 Stewart's game was good enough because he pitched a complete game against the Indians, giving his bullpen a rest in the first game of a double header, even though the three runs he gave up were the difference in an Oakland loss.

Law's game was good enough simply because he was there, in the Oakland bullpen. He had just criss-crossed the country, finally getting the call-up to the big club, according to The South Florida Sun-Sentinel.

But it was simply good enough, because, due to Stewart's complete game, Law didn't get into the contest. Between games, The Sun-Sentinel wrote, Law was informed his services were no longer needed. He was sent back down to AAA Tacoma.

It would be about the closest Law would get to getting into a major league game. In a professional career that would span nine seasons, Law never pitched from a major league mound.

Law's career began in 1983, signed by the Athletics out of Pensacola Junior College. He started as a reliever that year at rookie league Idaho Falls, but also got a taste of AA Albany, playing two games there.

Midway through 1984 at single-A Modesto, Law got a shot at starting. He went 11-2 with a 2.58 ERA, starting 17 contests. It was in June that Modesto manager George Mitterwald made the starting switch, putting Law in place of another starter, Mark Bauer, according to The Modesto Bee.

"We're going to move Joe Law in as a starter in Bauer's place," Mitterwald told The Bee. "He has a great arm, and we think he deserves a shot."

He returned to AA in 1985 at Huntsville, then bounced between levels through 1988, hitting Huntsville, Modesto, single-A Madison and then AAA Tacoma.

For much of 1987, Law was back in Modesto, going 10-1 with a 2.88 ERA. He also had a gem in August, throwing the franchise's first nine-inning no-hitter, according to The Bee. He also had a one-hitter in June.

Going into 1988, Law started at AA Huntsville. He started 17 games, going 9-3 with a 2.56 ERA. He ran into trouble in an early April game, giving up seven runs in one outing, four of them earned, according to The Orlando Sentinel.

It was in early July that Law made the jump to AAA Tacoma, then to major league Oakland, all in the matter of hours, according to The Sun-Sentinel in mid-July. He flew from Huntsville to Phoenix, then was told to report to Cleveland, called up to the Athletics for that one game, then was sent back to Tacoma.

Law went 5-3 with a 3.93 ERA at Tacoma that year. Though he didn't get to play in a major league game, Law was recorded as being optioned back to Tacoma again in mid-August.

Law returned for spring training in 1989, giving up a game-tying home run to Ken Griffey Jr. in one spring contest. But it was back to Tacoma, where he would return again in 1990, ending his affiliation with the Athletics.

Law returned for three three more appearances in 1993 with independent Salinas, ending his professional career. Later, in 1997, Law was recorded back in his native Pittsburgh, playing in the Greater Pittsburgh Federation League, according to The Pittsburgh Post-Gazette.