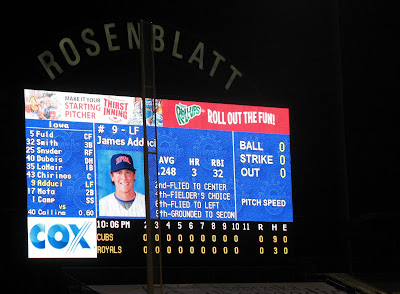 Rosenblatt Stadium scoreboard from Aug. 25, 2010 with James Adduci stats. Adduci is the son of a CMC set player.

Getting back to our August vacation, I've got a few posts still to get up from that. Today, I'll wrap up our visit to the now-closed Rosenblatt Stadium in Omaha.

I already briefly touched on our visit back in September. I rushed the post to coincide with the final game at Rosenblatt. But there were a couple other things I wanted to talk about. First, it was Vietnam Veteran's Appreciation Night and the Disabled American Veterans sponsored an Omaha Royals card set that was given away. We picked up two.

Then there was the CMC connection at the game, the son of a CMC player and a coach from the set that was supposed to be there, but that I'm not sure was. The son of the CMC player was Iowa Cubs left fielder James Adduci, son of CMC player Jim Adduci. The coach was Iowa Cubs hitting coach Von Joshua. 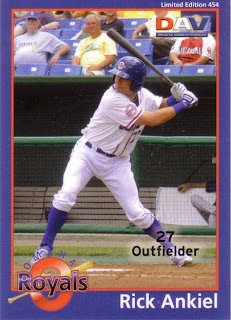 Back to the cards, the set sponsored by the Disable American Veterans. There were 15 cards in the set. Right on top was, perhaps, along with Alex Gordon, the most famous in the set, Rick Ankiel. Ankiel signed with the Royals in the off-season, but played only 27 games in Kansas City. He played another 18 with Omaha, getting him a card in this set.

Ankiel, of course, went on to be traded to the Braves at the deadline. He also hit the game-winning home run in Atlanta's only win in the division series. Ankiel has his own CMC connections. He was referenced in my January feature of one-time Louisville pitching coach Mark Riggins. 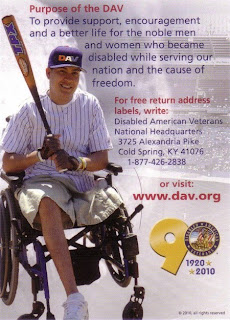 Each of the cards has the Disabled American Veterans logo on the front. The backs are all the same, with information on the DAV group, what they do and their Web site. There's also a photo of a veteran with a bat. I would have liked to have a quick blurb about the veteran pictured, though. 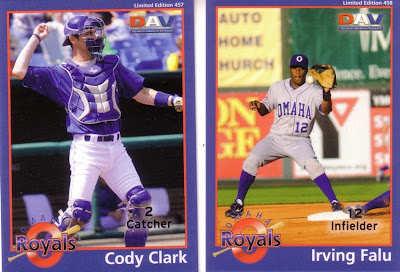 The longest-serving minor leaguers in the set who have yet to make the majors were these two guys, Cody Clark and Irving Falu. Both have spent eight seasons in the minors without making the majors.

Clark has been with the Royals since 2007, playing at some point with AAA Omaha in all four seasons. He started with Texas, not making it higher than single-A, played a year with the Braves at single-A Rome in 2006 then joined the Royals system. 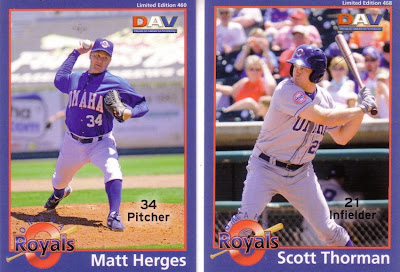 The longest-serving player was Matt Herges. Herges has been playing professionally since 1992, when he played at short-season Yakama with the Dodgers. He first made the majors seven years later, in 1999. He has since played in 11 major league seasons, his most recent in 2009. With Omaha, Herges got into 43 games and had a 4.63 ERA.

The other guy there is Scott Thorman, a veteran of two major league seasons, both with the Braves in 2006 and 2007. With Omaha in 2010, Thorman hit .280 and 22 home runs. One of those home runs came on our visit, a walk-off shot. A video of the shot is embedded in my previous Rosenblatt post.

To wrap up our August visit to Omaha, I went hoping to see Von Joshua, whom I'd recently featured here. He made the set as a coach for the Albuquerque Dukes. Joshua was the hitting coach this past year at Iowa. I didn't have a chance to really look for him, but in running over the player numbers, I didn't see his. So I never was sure if he was there.

But I was sure that James Adduci was there. Adduci's father Jim was a member of the CMC set as a player on the 1990 Scranton-Wilkes Barre Red Barons. I featured the father back in March as the son fought for a spot on the Cubs' roster. The son didn't make the Cubs, spending the year at Iowa. With the Iowa Cubs, the son hit .248 with three home runs. When we were there, Adduci went 0 for 5.
Posted by Steve78 at 1:00 PM