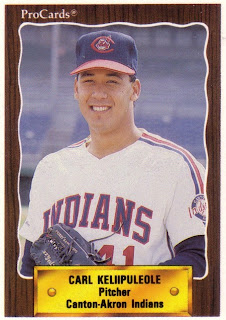 Carl Keliipuleole did his part to get his coach a milestone win in March 1986. The Brigham Young right-hander threw 8.2 innings against the University of Nevada Reno for a 9-5 win.

It was BYU coach Gary Pullins' 400 career coaching victory, according to The Deseret News. It was also part of a 16-6 record Keliipuleole over three years at the school.

It was a college performance that got the one-time resident of Hawaii drafted in the fourth round of the 1987 draft, taken by the Indians.

At BYU, Keliipuleole 16-6 record went along with an ERA of 4.98. Part of that ERA came in a May 1985 contest, where Keliipuleole gave up three crucial runs in relief, according to The News. He pitched the final two innings in a BYU win in April 1986.

After being drafted, Keliipuleole played 1987 at single-A Waterloo. There, he went 3-3 with a 2.43 ERA in 29 relief appearances.

He split 1988 between single-A Kinston and AA Williamsport. In 59 appearances between the two, Keliipuleole maintained an ERA of 2.65. In July, Keliipuleole pitched the final two innings in a Bills win for his first save, The Reading Eagle wrote.

It was in AA where Keliipuleole would stay. He moved with the Indians' AA franchise to Canton-Akron in 1989, his ERA moving too, up to 3.94. Keliipuleole also started 10 games that year, with an overall record of 5-5. In one contest, Keliipuleole gave up a run on an Andy Stankiewicz hit. Canton lost by a run, according to The Schenectady Gazette.

That off-season, the Indians purchased Keliipuleole's contract, but he returned to AA Canton for 1990. He went 5-9 with a 4.22 ERA in 19 starts and 27 appearances overall. By early September,r Keliipuleole was on waivers, Montreal claiming him.