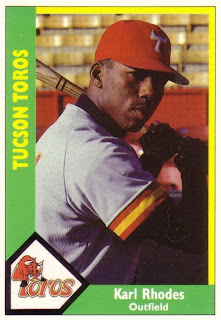 Karl "Tuffy" Rhodes didn't hit many home runs early in his career. By April 1994, he'd only hit five in 280 at-bats. But in 1994, Rhodes increased that total to eight. By inning five. Opening Day. Facing Dwight Gooden.

"I have to tell you I don't try to hit home runs," Rhodes told reporters after his three home run effort, only the second such display ever on Opening Day. "I go up there and try to hit line drives."

While he may have tried to hit line drives, Rhodes it would be his home run swing for which he would become better known, just not so much in the United States.

Rhodes would take his bat to Japan by 1996, where he played until last year. Rhodes collected a total of 464 home runs in the Far East, the most of any foreign-born player. He also claims a share of the single-season mark, with 55 hit in 2001.

A native of Cincinnati, Rhodes' career began stateside, selected in the third round of the 1986 draft by the Astros. He started that year in the rookie Gulf Coast League, hitting .293. He had three hits in one August game.

By 1988, Rhodes was still in single-A, at Osceola. He was also known more for his speed. By mid-May, Rhodes had already swiped 21 bases in 29 attempts, according to The Orlando Sentinel. He'd stolen 43 the previous year at Asheville.

"I've got decent speed 6.7 in the 60, but my hitting and defense are my strongest assets," Rhodes told The Sentinel. "I've got a good eye, am well-disciplined and hit to all fields."

Rhodes made AA Columbus in 1989 and AAA Tucson and then Houston in 1990. He played in 38 games that year for the Astros, hitting .244. He hit two doubles and scored twice in one September 1990 game. In another, he hit a bases-loaded, pinch-hit single for an Astros win.

Cubs manager Jim Lefebvre called Rhodes "a very interesting player," according to The Chicago Tribune. GM Larry Himes called him, according to The Tribune, "our most disciplined batter. He takes a pitcher deep into the count. He watches the ball into the catcher's mitt. He fouls off pitches, draws walks . . . "

The Cubs were looking at Rhodes for the next year, 1994. That was the year he hit his three Opening Day home runs. It was also his best in the majors. He played in 95 games in the strike-shortened year, hitting five more home runs. But, by 1995, he was on his way out. He played in just 23 games, split between the Cubs and the Red Sox. It was his final year in the majors.

But another career was about to begin, one in Nippon Professional Baseball in Japan. He played 13 seasons there, finishing last year with the most home runs of any foreign-born player.

In September 2001, as Rhodes challenged Sadaharu Oh's single-season mark, Rhodes told the Associated Press he wasn't thinking about the record. He was thinking about a pennant race.

"I'm just trying to swing at pitches in the strike zone," he told the wire service. "I've been getting some good pitches to hit and it helps when you have good hitters behind you."

"When I first came to Japan," he told The AP after hitting the milestone home run, "I never thought I would hit this many homers."

Rhodes' 2009 campaign would be his final one. He had hoped to continue for a 14th season this year. He told The Japan Times in December that, at the age of 41, he thought he could still hit. "I would not play if I were going to embarrass myself," he told The Times.

But Rhodes confirmed in an April interview with BaseballHappenings.net, that no one called. He had received no interest from teams for 2010.

Rhodes recalled to BaseballHappenings the year his Japanese baseball career, 1996. That year was rough, Rhodes recalled, especially the first months.

"Then, I got accustomed to the way Japanese culture was," Rhodes told BaseballHappenings, "and I never looked back."