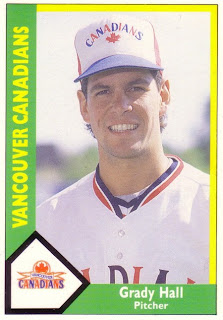 It was spring training 1991 and the White Sox were looking for a set-up man. The job was seen as wide open and The Chicago Tribune went looking to see who was interested.

Among the players asked was Grady Hall, a starter who'd spent the past five seasons in the minors.

"Does that kind of a job appeal to me? In the big leagues? C'mon ..." Hall responded to The Tribune. "Yes. Definitely."

"I don't think it would be that big of a problem at all," Hall told the paper of moving from starter to reliever. "My arm has been pretty flexible. It's got the buoyancy to bounce back."

It was a far cry from the Hall of five years earlier. Hall had been taken by the White Sox in the first round of the 1986 draft and immediately assigned to their AAA squad in Buffalo. But the head start meant little in the face of injury.

Hall went on to spend seven seasons in professional ball, never making that last step to the majors.

Hall was taken by the White Sox 20th overall, after a stellar season at Northwestern. Hall went 11-1 for the Wildcats and posted a 2.31 ERA with 94 strikeouts his final season.

The White Sox had such confidence in their left-hander that they assigned him to AAA Buffalo. It was something they knew he could handle, according to The Tribune.

"We feel that if he's struggling, he has the type of personality that will allow him to handle the failure," White Sox VP David Dombrowski told The Tribune. "He's very bright and should be able to learn from his mistakes."

Hall ended up going 4-5 with a 6.06 ERA. But he did well at points, especially early on. In his second game, Hall pitched a seven-inning complete-game shutout. His first start wasn't as good, but he still got the win, giving up three runs in 5.1 innings.

But the early high-hopes were put off by spring 1987. Hall suffered a stress fracture. "Surgery is an outside possibility," White Sox GM Larry Himes told The Tribune. "It doesn't sound good."

The bad elbow kept him out through July and he started at AA. He went on to pitch in 20 games for AA Birmingham, going 9-8 with a 2.96 ERA. He got one of his wins in an August game, where he allowed three runs and six hits in six innings. He also pitched in eight games back at AAA, at Vancouver, with a 4.11 ERA.

But 1989 was spent back at AA Birmingham, going 12-8 with a 3.45 ERA. At one point, Hall won eight straight. He won Southern League Pitcher of the Week honors in late June after pitching to complete games, striking out 20.

Hall went on to return to AAA in 1990, going 13-8 with a 4.24 ERA, setting up the talk of making the big club in 1991. Hall made his first relief appearance at Vancouver in May 1991, giving up a run in four innings. But by July, the White Sox were done with Hall, trading him to the Indians.