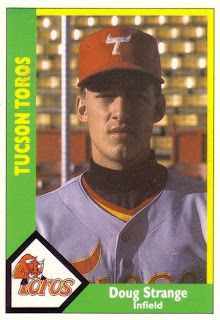 Doug Strange had been highly thought of by none other than the Tigers manager himself, Sparky Anderson. But that was in spring 1988. His season in 1988 did nothing to live up to the expectations.

Strange didn't make the Tigers out of spring training and went on to hit just .201 at AAA Toledo. He even saw time back at AA at Glens Falls.

Back for 1989, Strange told The Toledo Blade he'd tried to get away from everything over the winter and refresh. Everything included part-time jobs and lifting weights.

"Luckily I was able to gain some perspective," Strange told The Blade. "I learned that the way to play this game is to play hard and everything else will take care of itself."

Strange made his major league debut later that year, in July. It was the first of nine major league seasons in which he'd see time. His playing days wouldn't end until 2000, when he began a front office career.

Strange was drafted by the Tigers in the seventh round of the 1985 draft. He made AA Glens Falls and AAA Toledo in 1987, then Detroit in 1989.

Strange's manager with Glens Falls in 1987, Tom Burgess, told The Blade he believed Strange was going to make it. "He's going to get there as quickly as he wants," Burgess told the paper. That July, Strange hit home runs in consecutive games.

Strange's off-season work before 1989 paid off. Called up in July, Strange stayed for 64 games. He spent 1990 in the Astros system, next seeing major league action in 1991, three games for the Cubs. His most major league time came in 1993, playing 145 games with the Rangers, hitting .256. He hit a two-out single in a May game to give the Rangers the win.

Arriving with the Mariners for 1995, Strange proved an important part of Seattle's run to the playoffs and past the Yankees. The Mariners got into the playoffs after a tie for the division. Helping them to that tie was a Strange home run Sept. 19 that tied a game in the ninth that the Mariners won in extras.

"I'd be lying to you if I said this didn't mean something special," Strange told The Associated Press after the game. Strange went on to take the walk that tied up Game 5 of the Division Series against the Yankees.

But he returned for 2000, attempting a comeback with the Braves. He told The Spartanburg Herald-Journal he needed to leave on his own terms. He spoke as a member of the AA Greenville Braves.

"I just don't want to leave the game hurt," Strange told The Herald-Journal. "I want to give myself a chance to get healthy and what, if anything, happens from that. If nothing happens, I'll know it is time."

Strange played in just 18 games for Greenville that year, ending his career.