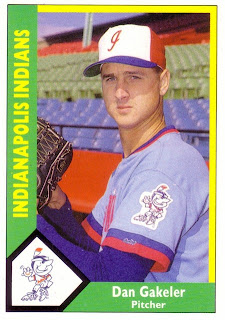 Dan Gakeler was a little shaky in his first start, June 9, 1991. His first six pitches were balls. It was enough for a visit from a direct Sparky Anderson.

"When Sparky came out, he told me, 'Let's not make this more complicated than it is. Throw strikes,'" Gakeler recalled to the Associated Press later.

Gakeler settled down enough to pitch through three innings, before being pulled in the fourth. A better outing would have to wait until his second start, two hits over 7.2 innings. It was enough for Anderson's hopes for the right-hander to soar.

But this would be Gakeler's only major league season. Shoulder problems kept him out much of the next year. Gakeler would have another shot in spring 1995, as a replacement player for Boston, but his career would end that year without returning to the majors.

Gakeler began his career with the Boston organization, taken in the first round of the January 1984 draft. He played that year at short-season Elmira. He made AA New Britain three years later, throwing a two-hitter in one May 1987 game, according to the Schenectady Gazette.

But AA was as far as he would get with the Red Sox on this run. He was traded to Montreal with Spike Owen for two other players. With the Expos system for 1989, Gakeler made AAA Indianapolis, returning there for 1990.

Signing with the Tigers for 1991, Gakeler finally got his break. He was the last pitcher cut out of spring training, but he was in Detroit by June. After his second start, with Gakeler going deep into the game and giving up just two hits, Anderson found the possibilities endless.

"This man is a bona fide major league starter," Anderson declared to the AP. "He's the best new pitcher I've had in 13 years here, since Dan Petry."

But Gakeler's season never lived up to Anderson's expectations. He ended the year in the bullpen, with a total of 31 appearances, seven of those starts. His ERA neared 6, at 5.74.

Back for spring training 1992, Gakeler went down early on with tendinitis in his right shoulder. After a May rehab start in Toledo, Gakeler was optimistic.

"I felt strong," Gakeler told The Toledo Blade. "I was hitting my spots, getting ahead. Now, I've got to bounce back tomorrow. That's the key. I have to bounce back."

In all, Gakeler had four rehab starts. He didn't bounce back. He missed the rest of the year and Detroit didn't invite him back for 1993. Signing back with the Red Sox, Gakeler pitched around he system, but didn't make Boston.

Then spring 1995 came around, with the strike dragging on. Gakeler signed on as a replacement player. He also had his eye on a coaching position. He was also trying to pay some bills.

"Hopefully, I'm helping them out, they'll help me out,'' Gakeler told The Hartford Courant in March. "We'll worry about the rest later. . . . I want to coach at some point, hopefully with this organization.'"