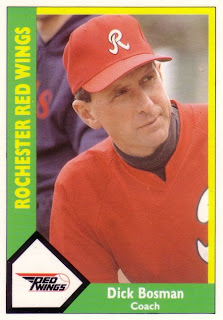 Highly-touted Orioles prospect Ben McDonald hadn't yet shown why he was so highly touted. Some said he'd been rushed to the majors. The injuries didn't help either.

"It's a heck of a lot easier to fail in front of 500 people in Rochester than 50,000 in Yankee Stadium," McDonald's pitching coach Dick Bosman told The St. Petersburg Times in March 1993. "That's traumatic."

"When your arm hurts for the first time, you think it's the end of the world," Bosman added. "Overcoming all of that is tough. I think it's a tribute to him that he has persevered through all of this."

Bosman had gotten his first look at McDonald as pitching coach for the Orioles' AAA club in Rochester, where Bosman coached for three seasons and McDonald made a seven-appearance stop in 1990 and two more in 1991.

Bosman, too, some had felt had been rushed too quickly to the majors, as a coach nearly a decade earlier. But it is a coaching career that continues in 2010 as a roving minor league coordinator with the Tampa Bay Rays.

That jump to the majors came in 1986 with the White Sox. It had been a decade since Bosman last pitched in the majors. He'd had an 11-year career pitching with the Senators, Indians and Athletics, even pitching a no-hitter and near-perfect game.

In the meantime, Bosman coached at Georgetown University, working at a Virginia car dealership in his downtime, according to the Washington Post.

But his first professional coaching job came that year in 1986, courtesy of White Sox General Manager Ken Harrelson. He started as pitching coach at AAA Buffalo, but by June was with the big club in Chicago after the firing of manager Tony LaRussa and pitching coach Dave Duncan, according to The Chicago Tribune.

Bosman stayed on with the White Sox through the end of 1987, when he was the one who was fired, according to The Tribune. New GM Larry Himes informed Bosman of the move.

"I understand why he would want to bring in his own guy," Bosman told The Tribune of Himes. "He said I was force-fed and brought along too soon. That may be true. But I know when I got to the big leagues I was capable of doing the job. I don't feel like I'm leaving because I failed."

Indeed, the White Sox pitching staff had been among the best in the league over Bosman's tenure, The Tribune wrote.

By 1989, Bosman was with the Orioles system at Rochester, and, by 1992, he was in Baltimore. It was a job with the big club that had seen much turnover in recent years.

"I'm not concerned about that one bit," Bosman told The Baltimore Sun of the turnover. "This is a new start. It's something I've worked for, and I feel very confident.

"Not that we're going to perform miracles right away - but I have a good feeling," Bosman added. If we can come out of spring training healthy, we've got a chance to be representative real quick."

Bosman stayed with Baltimore through 1994. He then joined his old team, the Texas Rangers as pitching coach through 2000, when he was fired. Though the Rangers had posted success, making the playoffs in three recent years, the pitching in 2000 was the third worst in the league, according to the Associated Press.

"He is not the reason that we have failed to perform up to expectations this season," Rangers manager Johnny Oates said in a statement. "However, I feel that we need to make improvement and progress in our overall pitching."

Bosman joined the Rays organization for 2001, serving as pitching coach for short-season Hudson Valley. He continues with the Rays as minor league pitching coordinator.

In his current position, Bosman takes the stance that pitchers need time in the minors before reaching the big leagues. It was a stance that Rays manager Joe Maddon adopted with pitchers liek Wade Davis and one MLB.com reduced to a Bosman saying: "He just needs a little more milage."