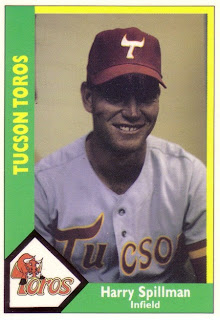 Harry Spilman wasn't drafted, he had to attend tryout camps to even get signed. But when he was signed, he excelled. Four years later, in 1978, the Reds farmhand was even talked about as a worthy successor for Pete Rose himself, according to a wire account.

"It's all really a dream," Spilman told the Associated Press in March 1978, after being invited to his first spring training.

"It's hard to say how long it will take to make the big leagues because the Reds are so loaded," Spilman told the AP at another point. "I've got to be patient, but if I have another good year, they'll be watching me."

Spilman had just come off a year at AA that had people watching. Playing for the Reds' Eastern League farm club at Trois-Rivieres, Quebec, Spilman hit a spectacular .373 with 16 home runs. He also earned the only unanimous selection to the Eastern League All-Star team that year.

He spent 1978 at AAA Indianapolis, hitting a still-good .295, before Reds fans had the opportunity to watch him that September, for four games. And, while he never lived up to the Rose talk that spring, he did have a career that spanned 12 major league seasons.

Spilman played in four straight seasons for the Reds, but never in more than 63 games. His hot hitting in the minors also never really followed him to the majors, his best year for the Reds was 1980, when he hit .267. The Reds traded him mid-1981 to the Astros.

Spilman played with the Astros through 1985. He never got in more than 44 games for the club, but he did make his impact. And he also made himself a good friend.

On April 19, 1983, Spilman even won a game for the Astros, and it was against his old team, the Reds. With two outs, in the bottom of the ninth, Spilman came to bat as a pinch-hitter with two on. The Astros were also down by two. He promptly deposited a Tom Hume pitch over the right field wall for a walk-off win, according to the wire account.

"Guys you trade seem to come back to haunt you," Reds manager Russ Nixon told reporters afterward. "You've got to give him credit. He hit a bad pitch. ... I know the pitch was up. I know it had to be up to go that far."

Spilman would move on to the Tigers and then the Giants in 1986. It was with the Giants in 1987 that Spilman met up with his old friend from the Astros, on the playing field. Spilman became just another strike-out victim for future Hall of Famer Nolan Ryan.

It was something that some held as a badge of honor. So, in 1989, when the Rangers compiled a list of Ryan's victims and Spilman wasn't on it, he was agitated, according to The New York Times. He called up his friend and, by that time neighbor, to complain.

His playing career over, Spilman stayed in baseball. He signed on with the Indians as a minor league hitting instructor. He would go on to a career as minor league manager and hitting coach. Most recently, Spilman has served as a roving minor league instructor for Ryan's Rangers.

But one of his early successes, according to the New York Times, was simply getting another future major league star to call home.

In 1991, playing for rookie league Burlington, the Indians' new first-round draft pick started off in a nervous slump.

Spilman took him aside. The 19-year-old only six years out of the Dominican Republic was obviously homesick. Spilman's advice seemed to work.