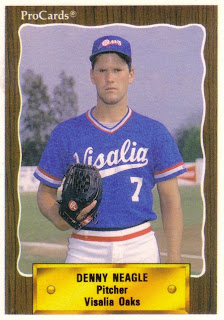 Traded to the Yankees earlier in the summer, Denny Neagle started making connections in his new town, New York. Among those connections, was a man Neagle met at a club.

Soon, Neagle called that man, looking to make a purchase. That man was Kirk Radomski. And Neagle was looking for HGH.

Neagle, Radomski recalled to George Mitchell, appeared already familiar with the drug. Neagle became a regular customer, of not only HGH, but anabolic steroids, as well.

It was a meeting and relationship detailed in the 2007 Mitchell Report on performance enhancing drug use in baseball. The Mitchell Report itself was also the final disintegration of a once great career, but one that had long since self-destructed.

It was a career that began 18 years before that report was published, with Neagle taken in the third-round of the 1989 draft by the Twins. Neagle was a virtual hometown product, a Maryland native who played his college ball at the University of Minnesota.

Neagle began 1990 at single-A Visalia, posting an 8-0 record before making AA Orlando by June. He opened his Orlando stint with a four-hit shutout, according to the Orlando Sentinel.

"I was determined to pitch the same way I did at Visalia,'' Neagle told The Sentinel after that win. ''Nothing fancy, nothing different. I didn't want to put a whole lot of pressure on myself. It wasn't a case of trying to prove myself here all over again.''

Neagle made it to Minnesota the next July, promptly getting a line-drive off his throwing elbow. The injury, and a subsequent demotion, delayed his other homecoming, pitching for the Twins at Baltimore, according to the Baltimore Sun.

His best year came in 1997, with the Braves. Neagle went 20-5 with a 2.97 ERA. It was enough for Neagle to come in third in the Cy Young voting. But he also had to wait his turn in the playoffs, pitching behind Greg Maddox, John Smoltz and Tom Glavine. It was a wait that lasted 13 days.

"I'm not too worried about it, really," Neagle told the Associated Press. "The adrenaline rushes in and gets you throwing."

Neagle went on to pitch a complete-game shutout in Game 4 of the 1997 NLCS, a series the Braves would go on to lose to the Marlins.

By 2000, Neagle was with the Reds and then the Yankees, in time for his meeting with Radomski.

Then Neagle signed a deal with the Rockies that was one that became synonymous would soon easily earn the prefix "ill-advised." It was a $51 million, five-year deal. Neagle would only play three forgettable seasons, often injured, with the final year canceled by the Rockies.

It was canceled after a series of off-the-field issues, including that he was simply off the field. His final game was July 20, 2003. But, more notably, Neagle pleaded guilty to two crimes after that.

As detailed in a 2006 wire story, Neagle pleaded guilty to one count of patronizing a prostitute. He was accused of paying a woman $40 for sex in December 2004. Neagle previously pleaded guilty to driving while impaired in 2003.

It was also during that time that Neagle kept up his relationship with Radomski. Neagle purchased the drugs from Radomski five or six times from 2000 to 2004, Radomski told Mitchell. Radomski's story was backed up by copies of eight checks, from or on behalf of Neagle.

Neagle did not respond to Mitchell's request for an interview to address the allegations.