Shockey and Not Shockey 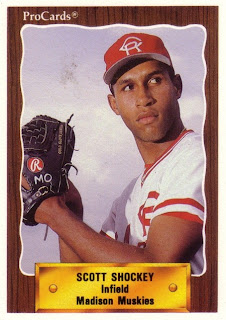 Let me first say this next card is one of cards in the set I remember from when I was a kid. The photo is a nice one of a pitcher on my hometown team, the Cedar Rapids Reds.

The CR Reds' home Veterans Memorial Stadium was the first stadium I ever attended a game at. I can't say I remember much about that game, but I do remember during one game being urged by my parents to get a slip of paper signed by a player signing for other kids.

So anyway, I remember getting this card and thinking, cool, I got a Cedar Rapids card. I was more of a picture guy when I was a kid, never actually reading or questioning what was on the card.

So that brings me to this card, CMC 659. I remember seeing it but I don't ever remember questioning the team. The player is identified as Scott Shockey, of the Midwest League's Madison Muskies. Maybe Shockey was traded before the picture was changed? No. According to Baseball Reference, Shockey was a career-long member of the Athletics organization.

So, no, that's Not Shockey. 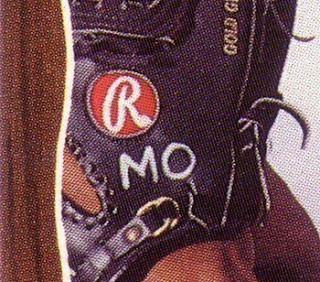 In reality, the search took two seconds. See his glove? Written in white letters is what appeared the name "MO." Would the Baseball Reference roster on the 1990 CR Reds include a Mo as a pitcher? Yes. Mo Sanford.

Looks like he found a way to get his name on a card where his name was nowhere to be found. He even made the majors for three short stays and got some cards of his own, correct name and correct picture.

So, what I'm getting at, is, with both referenced players identified, I'll treat this card as a multi-player card and review both Shockey and Sanford. Shockey will be up later today, with Sanford going tomorrow.
Posted by Steve78 at 1:00 PM

Email ThisBlogThis!Share to TwitterShare to FacebookShare to Pinterest
Labels: error