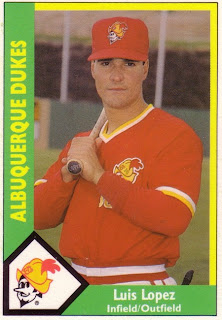 Talked about for the team's hitting coach, Manager Marty Brown looked forward to the prospect of having Luis Lopez on his staff.

"I know Louie and would love to have him," Brown said in a November 2009 article. "The front office is putting together a coaching staff based on how they expect me to manage, and I will have faith in the guys they choose to work with me."

Brown was speaking as the new manager of the Tohoku Rakuten Golden Eagles, of Japan's Pacific League, speaking to the Japan Times. Lopez, coming off a stint as a Golden Eagles scout, was returning to the country which made him a hero, now as a coach for the Golden Eagles' farm team.

Lopez only played in a total of 41 major league games over two seasons, his final one coming in October 1991, with the Indians.

But Lopez' professional playing career wouldn't end until more than a decade later, in 2004, as Lopez extended his career touring Japan and the independent circuit stateside with the Atlantic League's Somerset Patriots.

Lopez' retirement in 2004 came more than two decades after his career began, taken by the Dodgers in the second round of the 1983 draft. A native of the Dodgers' old home in Brooklyn, Lopez began his playing days in the Dodgers organization with rookie league Great Falls.

Lopez made AA San Antonio in 1988, helping set up the winning run in a 26-inning game with a double. Lopez got a taste of AAA Albuquerque in 1989, returning in 1990 for the full year.

It was in September 1990 that Lopez got his taste of Los Angeles. Lopez played in six games for the Dodgers that year, getting six at bats and zero hits.

Lopez wouldn't get his first major league hit until the next year, with the Indians. The Dodgers released him in the off season and Lopez was signed by Cleveland. Lopez spent much of the season with Cleveland, playing in 35 games. His first hit came June 9 at Minnesota. His last came in his last game, Oct. 6 at New York.

Four more seasons in AA and AAA ball and Lopez' time in affiliated baseball was done. But his career continued in Japan. In six seasons in Japan, playing for the Hiroshima Toyo Carp and the Fukuoka Daiei Hawks.


Lopez found his bat in Japan, hitting .303 and 129 home runs. He was so good that the tight-fisted Carp let him go for asking too high a salary.


"Man, it is great over there," Lopez told The Hunterdon County Democrat in 2004, according to a story posted on JapaneseBaseball.com. "It was a great opportunity and they made a great offer and it was the best move I ever made."

In between his six seasons in Japan, Lopez played parts of two seasons with Somerset. He returned to Somerset for 2003 and 2004, retiring mid-year 2004. His playing days over, Lopez returned to Japan as a scout in 2005, looking for foreign players who would be good in Japan.

It was this past off season that Lopez was named as hitting coach for the Yamagata Golden Eagles, the top club's Ni-Gun farm team.