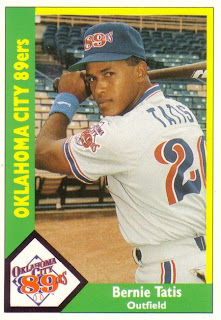 Major League Baseball had just tightened rules on treatment of Dominican prospects and Blue Jays farmhand and Dominican Republic-native Bernie Tatis believed it was progress, he told The Evening Independent of St. Petersburg in 1986.

The new rules placed restrictions on scouts, including the age that prospects could sign.

"A lot of scouts sign players when they are young," Tatis told the paper. "If a boy is good, the scouts will try to sign him before anybody else, even if he's only 15 or 16, I think it's a good idea to wait, so the boy can finish school."

Tatis himself played his first professional game at the age of 19, in Medicine Hat, Alberta, in 1981, making a slow rise through the Toronto system.

Tatis played at single-A Florence and Kinston through 1984. That year in Florence, Tatis stole 83 bases. He made AA Knoxville in 1985, where he stayed through 1987, having a couple triples in one game May 31 his final year.

Signed by the Pirates for 1988, Pittsburgh took a close look at Tatis, according to the Beaver Country Times. He had more at bats early on than any other Pirate. But Tatis was sent back down, spending the year at AAA Buffalo.

By spring 1989, Tatis was loose, loose enough to pull the shaving cream prank on a young Moises Alou, according to The Pittsburgh Press. With Alou fast asleep, Tatis filled a towel with shaving cream, placed it next to Alou's head and waited for him to roll over. He did.

Tatis also, before spring training was out, was assigned to Mexico City.

Back stateside for 1990, Tatis signed with Texas, playing half the year with Oklahoma City, the other half with Cleveland's team at AA Akron. A handful of games for 1991 with the Indians system and Tatis' time in affiliated ball was over, never making the majors.