Pat Kelly, Then and Then 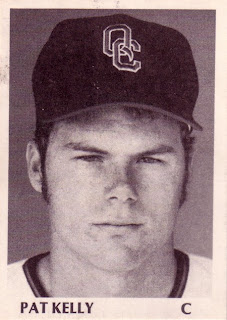 A couple months ago, I wrote about a trip to a local card show, where I'd spotted a 1961 Ray Rippelmeyer card. It was a card I wouldn't have noticed, were it not for this blog.

I had just featured Rippelmeyer a few days earlier. He was actually the seventh overall card I reviewed. The find turned into a post, Then and Then.

While researching the Brian McCann trainer profile, I turned to eBay. Getting through the mountain of non-trainer Brian McCanns, I found a few cards that helped confirm some of the research for that posting. I picked them up and they're actually pretty interesting. I'll get to them sometime soon.

Along with the McCanns, I picked up a couple extra cards. One of them was this Pat Kelly. It's a minor league card from 1975, one of the earlier minor league cards put out. (Another card I picked up was of Ed Nottle, a yet-to-be featured manager in the CMC set. His card is from 1974.)

Kelly, another CMC set member with a similar name as a more famous player, became the manager of the Las Vegas Stars in 1990. But 15 years earlier, he was in his second season as a catcher for the Quad City Angels in the single A Midwest League. He was also five years away from his only three games in the major leagues. 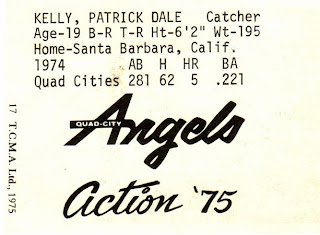 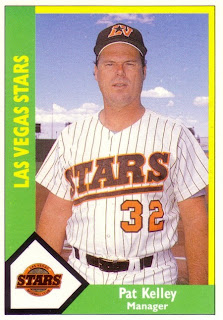 But his time with the Davenport, Iowa, team earned him one of his early cards, a TCMA "Action '75" card. The card included the basic photo front with his name and position. The back is equally as basic. As we'll see when the Nottle card gets its own Then and Then, the 1975 card has stats and some quick background information. The card also got his name spelled correctly, something CMC didn't do with its effort. Rippelmeyer had a similar variation with his name.

The 1970s minor league cards themselves were begun by card collecting friends Tom Collier and Mike Aronstein (TCMA). Soon, Collier got out, leaving Aronstein producing the sets with permission from the teams, according to a 2009 Aronstein interview with RipkenintheMinors.com.

The goal of the cards for Aronstein, according to the interview, was simply to make money to buy more cards. The cards were printed from about 1972 to 1984, the final two years under Collectors Marketing Corp., CMC.

Kelly spent all of 1974 with Quad City, playing in 86 games, hitting five home runs and batting just .221. He split 1975 between Quad City and single-A Salinas. Quad City fans had 40 games at which to see the catcher on their card in action.

At home June 3, 1980, Kelly came to bat in the bottom of the 10th, after coming in as a defensive replacement an inning before. With one on at Exhibition Stadium and against the team that drafted him and traded him, the Angels, Kelly grounded out to short, ending his brief major league career five years after Quad City and 10 years before Las Vegas.