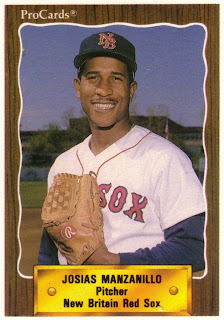 It's not often when a player has one moment in his career notable in the public's consciousness, let alone two. Especially two that could be used as examples to young ballplayers of how not to do things.

Yet that is the case for Josias Manzanillo, recipient of a cringe-worthy physical injury and an anger-worthy professional injury, both of which Manzanillo had the power to prevent.

Manzanillo started his in 1983 one of any number of players coming out of the Dominican Republic as a free agent. Sent to short-season Elmira, Manzanillo had difficulty learning English, and keeping onions out of his dinner, according to the Providence Journal.

"My goal was to play in the big leagues," Manzanillo told The Journal in 2005, "so I wanted to learn English and the American way, how you do things here. You need to be able to communicate."

Manzanillo stayed with the Red Sox organization for eight seasons, not making AA until 1987 and AAA until 1990. He made Boston in 1991, pitching in a single inning in a single game, giving up two runs. He made it back to the majors in 1993 with the Brewers and the Mets.

With the Mets in 1994 and eleven years after his pro debut, Manzanillo had the most success he'd had. He threw in a total of 37 games, posting a 2.66 ERA. The Mitchell Report, citing a man nicknamed Murdock, would later suggest a explanation for his 1994 success.

But three years, and a tour with the Yankees later, Manzanillo was with Seattle, in the Kingdome pitching against Manny Ramirez and the Indians. Then came the answer of why many athletes wear specific protection devices. Ramirez lined one directly back at Manzanillo, hitting him in the groin. Manzanillo wasn't wearing a cup.

After surgery, Manzanillo returned, but not for long.

"I came back and I wasn't the same guy," Manzanillo told the New York Daily News in 1999. "My confidence was tough because I was trying to protect myself before I threw the ball."

Manzanillo went on to pitch through 2004. His career included parts of 11 major league seasons, with his total pro career spanning more than 20. He pitched a career ERA of 4.71 in 267 total appearances.

Unable to make the Red Sox in 2005, Manzanillo retired.

It was in December 2007 that the baseball world learned a possible reason for his 1994 success: steroids.

Manzanillo was one of several players named in the Mitchell Report as having used steroids. Mitchell informant Kirk Radomski told George Mitchell he personally injected Manzanillo with the steroid Deca-Durabolin, the only instance where Radomski said he personally witnessed a player using steroids.

Manzanillo's lawyer responded to the allegations in the report, admitting his client purchased staroids, but saying his client never used them.

A clubhouse attendant nicknamed Murdock, Radomski's nickname, told Manzanillo the steroids would help him gain velocity on his fastball. Manzanillo purchased more than $200 worth, but "chickened out or thought better of it," the lawyer told Mitchell.