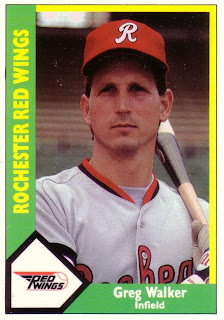 Warming up before a game against the Angels Greg Walker caught the ball, but his attention was instantly drawn elsewhere.

There was something wrong with his hip. Quickly, his right leg was numb.

His first reaction that day, July 30, 1988, was that he'd had a heart attack. What it was, was a seizure the threatened his life, the first of two.

"A lot worse things happen to people," Walker told reporters a month after the incident, according to a wire account. "I feel lucky to be here."

It was the most serious of a series of problems for the White Sox everyday first basemen. He had broke his wrist in 1986, underwent surgeries in 1989 and 1990, according to The Los Angeles Times, and he'd had a bad shoulder since high school.

Then there were the seizures, determined to be caused by a viral infection, according to media accounts, an infection that was controlled through medication.

Walker was originally taken by the Phillies in the 20th round of the 1977 draft. He was picked up by Chicago two years later. He made AA Glens Falls in 1981 and AAA Edmonton and then the majors in 1982.

The seizures kept him out until 1989. With the surgery, he played in only 77 games and hit .210. Two early games with Chicago in 1990 and the White Sox gave him his release, though he would return later in a different capacity.

Picked up by Baltimore, Walker went to AAA Rochester. Called back up to Baltimore in June, Walker played his final major league game July 1. He spoke to The Times in 1991 as he tried to make the Angels squad, an attempt that was ultimately unsuccessful.