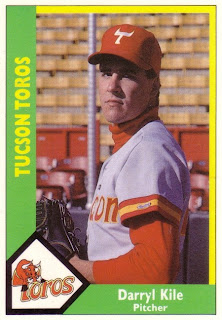 Darryl Kile's name appeared on the stadium scoreboard, announced as that day's starter, many times throughout his career.

It was there on April 25, 1991, for his first major league start, pressed into service by a teammate's injury. It was a start where he pitched six sterling innings, never giving up a hit.

It was there on Sept. 8, 1993, when he told his manager he would pitch a four-hit shutout, then gave up one run, but no hits, accomplishing the no-hitter he'd missed out on two years earlier.

It was also there June 26, 2002. Announced on the Busch Stadium scoreboard as that day's starter was Kile. This was his memorial service. Kile passed away four days earlier of a heart attack.

That day, former Astro teammate Pete Harnisch told of mobbing Kile on the mound after his no-hitter. It was Harnisch's personal greatest thrill as a player, playing in Kile's no-hitter, according to an MLB.com account.

But, Harnisch said, according to MLB.com, Kile was more than a teammate.

"I had a teammate, a golf partner, very soon a friend, a roommate and finally a brother," Harnisch said at the service. "That was the natural progression with Darryl: teammate to brother. I don't know if it was his good nature, sensitivity, dependability or caring. I'm sure it was all those things that made our relationship so strong."

Kile was taken by the Astros in 1987 out of high school, after each team passed on him through 29 rounds. He made AA Columbus, Ga., in 1989 and AAA Tucson that same year, the late draft pick becoming a top prospect.

He made Houston that April in 1991. His first start came as Mark Portugal was injured.

The 22-year-old right hander tossed 65 pitches over six innings. He never came close to giving up a hit before manager Art Howe pulled his young pitcher. The Astrodome crowed booed.

"I wanted to stay in the game and I wanted to win the game," Kile told reporters afterward in a wire account, "but I haven't thrown that much in a long time so he did what he thought was best for me and the team."

"It was the best control I've had," Kile told reporters after he no-hit the Mets in 1993. "When I did make a mistake, my teammates were there to make the out. A lot of luck goes into a no-hitter."

Kile stayed with Houston through 1997, winning 19 his final year. He signed with the Rockies that off season. He stayed two lackluster years in Colorado before being traded to St. Louis and regaining his old form. He won 20 his first year as a Cardinal, 16 the next.

He had five wins in 2002 when the Cardinals visited Chicago June 22. Two hours before gametime, Kile's teammates realized he wasn't there. Kile was soon found, passed away in his hotel room.

"Our club is just totally staggered, I mean, devastated,'' Cardinals manager Tony La Russa told reporters that day, wiping away tears. "You guys know what a pro he is.''

At the Busch Stadium memorial service, former Cardinals pitcher Rick Horton, of the St. Louis chapter of Baseball Chapel, described Kile, DK, according to the MLB.com account, as "a devoted husband, father, professional through and through."
"In the clubhouse and on this field, DK has impacted so many people in a powerful way," Horton said. "And that's why so many are gathered here this afternoon."
1990 CMC Tally
Cards Reviewed: 116/880 - 13.2%
Made the Majors: 75 - 65%
Never Made the Majors: 41 - 35%
5+ Seasons in the Majors: 31
10+ Seasons in the Minors: 42
Posted by Steve78 at 7:00 PM