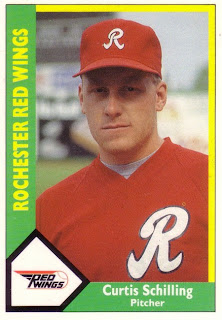 Their starter knocked out with a line drive off his leg, the Yavapai College Roughriders turned to their ailing ace, Curt Schilling, according to an account in The Prescott Daily Courier.

Schilling who had just come off a turn with the flu, took to the mound.

It was a situation reminiscent of the Curt Schilling of 18 years later, taking the mound with another physical ailment, an injured ankle. In an effort that instantly became the Legend of Schilling and his Bloody Sock, Schilling helped pitch the Red Sox to the World Series and their first championship in 86 years.

While the stakes weren't as high on this day, April 3, 1986, it was still an important non-conference game for tiny Yavapai College.

From the first batter, it was apparent: there would be no Legend of Curt Schilling and Anything Flu-Related. A single, two doubles and a home run later and Yavapai College was on its way to a 7-4 loss.

It was one of only a handful of setbacks for the Yavapai star, he was taken in the second round of the draft that year by Boston, the very team he would help pitch out of the baseball wilderness some 18 years later.

But, of course, his route to the Bloody Sock would not be a direct one. While Schilling impressed, the Red Sox had their eye on another pitcher they believed could do the same thing, in 1988. They sent Schilling, fellow prospect Brady Anderson to the Orioles for 30-year-old Iowa-born pitcher Mike Boddicker.

"There's no doubt we gave up promising players for Mike," Red Sox GM Lou Gorman told reporters in a year Boston won the division, but nothing else, "but (Boddicker)'s a quality pitcher, the kind of pitcher who can win a pennant for you."

The Red Sox can't be blamed for letting Schilling get away. The Orioles, and then the Astros did the same thing. The Orioles got 44 appearances over three seasons, five of them starts, before shipping Schilling and two others to Houston for a past-his-prime Glenn Davis.

It was the Phillies who became the beneficiaries of the others' short-sightedness. In 1992, his first with Philadelphia, Schilling won 14 games and posted a sterling 2.35 ERA. The next year, he won 16 and got his first taste of the World Series.

Traded again for 2004, Schilling arrived where he started, with Boston, helping bring the phrase "bloody sock" into the baseball lexicon.

Eighteen years earlier, the flu game notwithstanding, Schilling helped keep his Yavapai team in the hunt for a national championship with a last-inning relief-appearance strikeout to preserve a Yavapai win, according to The Courier.

He even admitted to The Courier he'd lost track of the score, believing on his last strike out the game was tied and heading to extras.