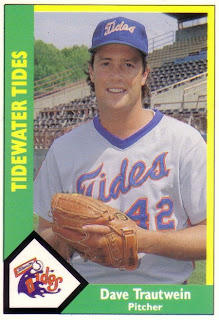 Coming off a spectacular year at AA Jackson, Dave Trautwein had high hopes for 1990. He was on the Mets 40-man roster. But with spring training virtually wiped out by the 1990 lockout, Trautwein found himself unprepared for the next step.

"A couple of times I had no one to throw to so I just threw at a brick wall," Trautwein told The Daily Press of Hampton Roads, Va., that April, adding later, "It got to the point where I didn't think I was going to get a chance to play this year."

Once the season started, Trautwein ended up hitting another brick wall, the proverbial kind.

Taken by the Mets in the 22nd round of the 1987 draft, Trautwein was the brother of would-be major leaguer John Trautwein. Despite spending six seasons in professional baseball, the younger Trautwein never followed his father to the majors.

"I got off to a slow start because I didn't throw due to a short spring training," Trautwein told The Daily Press that August. "What hurt me during the first month of the season is that I lost a little confidence. It's a different level up here. It's a lot tougher. I realized I couldn't pitch the way I pitched in Jackson."