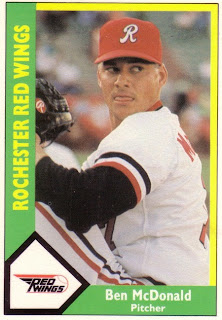 "He had unbelievable stuff, too, just like Strasburg," Rizzo told the paper, "but he got hurt all of the time. He had a very lackluster career. … There's nothing guaranteed in this game."

McDonald came out of LSU in 1989, selected by the Orioles to anchor their starting rotation for years to come. He hit Baltimore Sept. 6, 1989, the second member of that year's draft to hit the majors, John Olerud being the first.

McDonald went on to have a respectable 9-season major league career, going 78-70. But for a pitcher who came with the hype that McDonald came with, it was still a disappointment.

In the baseball world, McDonald was on everyone's want list, something the makers of the 1990 CMC set knew well. It was McDonald's card that was featured prominently on the top of every box of cards. (McDonald wouldn't even be the most memorable player on his Rochester team, let alone the set. That mark would have to go to fellow 1990 Red Wing set member Curt Schilling.)

But the injuries that would define McDonald's career were what sent McDonald to Rochester in the first place. It was a pulled muscle in April 1990 that sent him to AAA for a rehab assignment.

In all, McDonald would land on the disabled list six times. The stuff that made him the expected next-Roger Clemens never really materialized.

McDonald told MLB.com last year of the injury that would lead to the end of his career.

"I didn't feel like my stuff was worse; I was just more sore than usual," he told the site. "Finally, I threw one pitch and got this burning sensation, and sure enough, I got an MRI [exam] and had a torn rotator cuff."

In the run-up to the 1989 draft, McDonald told Sports Illustrated of his plans to build a house near his parents in Louisiana. He spoke to USA Today from that house.

"Don't feel sorry for me," McDonald told the paper. "There were other things I wanted to accomplish but didn't. But I still got to play in the big leagues. I still made a good living. I could have been hurt and out of the game my first year."