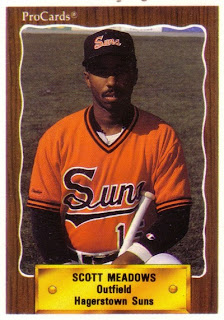 Here's our first card from the upper reaches of the CMC set. It might even be considered a different set, were it not that they came in the same packs. 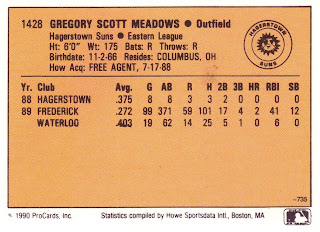 Meadows was signed by the Orioles out of Ohio State University. He wasn't drafted, but signed as a free agent. He spent seven seasons in the minor leagues and never made the majors. He spent 1990 with the O's AA affiliate, the Hagerstown Suns batting .293 in 148 games. His next two years, his final two in affiliated ball, were spent between Hagerstown and AAA Rochester. He put up decent numbers, but it wasn't enough for Baltimore.

His time in Rochester with Red Wings was enough, however, for someone to ask $100 for his game-used jersey last year. To sweeten the deal, a pair of road pants, size 31, were also included.

Meadows spent 1993 and 1994 in the independent Northern League with the St. Paul Saints and Duluth Dukes. These days, Google searches reveal he teaches physical education at a school near his college town of Columbus.