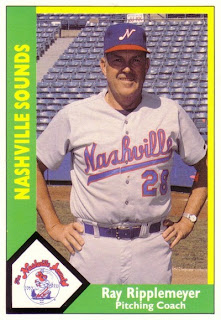 While there are 880 cards in the CMC set, not all were players. Included in the AAA portion are managers, coaches and even trainers. While trainers might be a more difficult fit, managers and coaches fit nicely with this blog as many are former players.

Ray Rippelmeyer, spelled here Ripplemeyer, served as the Nashville Sounds' pitching coach for 1990, his second season with the club. It was a continuation of a baseball career that dated back to 1954. Rippelmeyer played 11 seasons in the minors, pitching in future major league cities Seattle, Atlanta and San Diego. He made it up for only one brief stint with the Washington Senators in 1962. He appeared in 18 games, debuting April 14, pitching his final inning July 1. In 39.1 innings, he struck out 17. 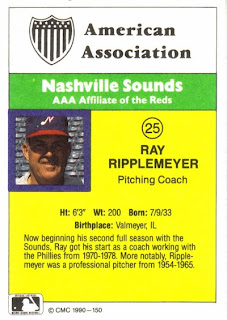 Rippelmeyer would go on to manage and coach in the minors, and even serve as pitching coach for the Phillies from 1970 to 1978, working with future Hall of Famer Steve Carlton.

In a March 2009 article in Suburban Journals of St. Louis, Rippelmeyer was quoted as saying the 1972 trade for Carlton was "the biggest crime since the Brinks robbery."

When asked about steroid use, Rippelmeyer, then 65, said what appeared to the reporter as an obvious reference to performance enhancing drugs. Rippelmeyer was quoted as saying, "I pitched for a lot of years and can recall only two opposite field home runs being hit off me."