In his second season as an Astros minor league trainer, Ron Porterfield spoke to his hometown Santa Fe New Mexican about his new career in the minors.

He'd realized he couldn't play his way to the pros. So he turned his attention to training, he told The New Mexican.

"I can't play anymore, but it's as close to playing as I can get without actually being on the field," Porterfield told The New Mexican then. "I like to be around the game and help people out as much as I can. I wanted a job where I can get up in the morning and love going to work, even if I don't make a lot of money."

Porterfield has since continued to be around the game as a trainer. He's also made the majors, eventually becoming head athletic trainer in Tampa Bay and serving on the medical staff with the Dodgers in Los Angeles.

Porterfield started as a trainer in 1988, with the Astros at short-season Auburn. The Astros hired him before he finished school at New Mexico State, where he'd played both football and baseball.

With the Astros, he started at Auburn, then moved to the Gulf Coast League for 1989 and AA Columbus in 1990. He earned top trainer in the Texas League honors for 1992 with AA Jackson.

"First thing I say is that it's not the end of the world," Porterfield told The Sarasota Herald-Tribune in September 2008 of his approach to injured players like Evan Longoria. "We're going to get through it."

"He's the best in the game," Longoria told The Times of Porterfield. "To my career, I wish he would have meant a lot less … but he's meant a tremendous amount."

He then moved to the Dodgers for 2018, where he remains director of player health for 2021. 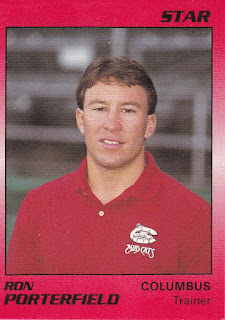