Braves manager Brian Snitker added Rick Kranitz to his staff for 2019 and he couldn't have been happier, according to The Atlanta Journal-Constitution.

"Right from the start of the interview process, Rick stood out with his knowledge, credentials, and experience," Snitker said in a release, according to The Journal-Constitution. "He has had a lot of success developing young talent and he is going to have a big impact getting the most out of all of our pitchers."

Kranitz amassed that knowledge and experience over four decades in the game, first as a player, then as a coach, first in the minors and then in the majors.

Kranitz' career in baseball began in 1979, taken by the Brewers in the fourth round of the draft out of Oklahoma State.

Kranitz the player started with the Brewers at single-A Burlington. He started 13 games and went 4-9, with a 3.24 ERA. He then moved to AA Holyoke for 1980 and made AAA Vancouver in 1982.

He saw one more full season, then turned coach with the Cubs. He started at rookie Pikeville as pitching coach. He then made high-A Winston-Salem for 1985, single-A Peoria for 1988 and AA Charlotte for 1990.

In 1990 at Charlotte, Kranitz worked with former shortstop Jim Bullinger on his transition to pitching, including an outing where he went 7.2 and gave up one run, The Charlotte Observer wrote.

"That's as fine a game as I've seen pitched this year, either for us or against us," Kranitz told The Observer afterward.

Kranitz became the Cubs's minor league pitching coordinator for 1994, then assistant coach in Chicago in 1996. He continued with the Cubs through 2005, spending much of that time as an assistant coach.

For 2006, he moved to the Marlins as pitching coach in Miami. His work that year working with the Marlins' young pitchers garnered him Baseball America's Major League Coach of the Year award.

"Number one, I think he's used to working with young guys," Marlins 2006 manager Joe Girardi told Baseball America of Kranitz. "Number two, Kranny's outstanding mechanically and he's very prepared and has a plan. He loves what he does. He's a tireless worker."

Kranitz stayed with the Marlins through 2007. He then served as pitching coach for the Orioles three seasons and Brewers for five. After going through the Phillies, he arrived with the Braves for 2019. He continues with Atlanta for 2021. 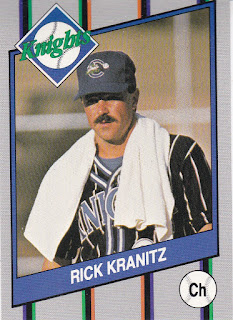