Kirk Dulom buckled down, got back on college field and turned pro; Played single pro campaign

Kirk Dulom lost his spot on the University of Miami baseball team in 1988 over academic issues, The Miami Herald wrote.

Dulom responded by buckling down, making up the needed credit hours and rejoining the team for 1989, The Herald wrote.

"I want a championship ring real bad," Dulom told The Herald at that season's outset. "Going out the way I did last year wasn't the way to end a college baseball career."

Dulom's college baseball career soon ended that year and it ended with him turning pro. His pro career, though, proved brief, a single season spent at high-A.

Dulom's career began and ended in 1990, having been signed by the Yankees as an undrafted free agent out of Miami. Dulom was also sometimes credited as Kirk Dullom.

At Miami in 1987, Dulom knocked in a run on a double in a March game. In late April, he set a new school record for triples in a season with eight.

In his return in 1989, he hit a grand slam in a May win. The opposing team issued an intentional walk to get to a then-struggling Dulom, The South Florida Sun Sentinel wrote.

"They knew I wasn't swinging the bat well," Dulom told The Sun Sentinel. "I take that personally. I wanted a pitch I could hit hard."

His season over, Dulom signed with the Yankees that October and started on the field in 1990. Assigned to high-A Fort Lauderdale, Dulom saw 76 games. He hit .172, with two home runs and 24 RBI, marking the extent of his pro career. 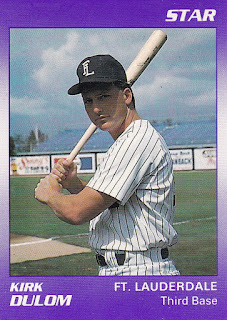