Originally published Aug. 18, 2019
Heathcliff Slocumb believed everything happened for a reason, even the worst things, according to The Seattle Times. And just about the worst thing happened in November 1992 when his wife, the mother of their two daughters, died of cancer.

But Slocumb got through it with his strong faith in God, he recalled to The Times in 1997.

"It gives you more of a sense of peace, like, `OK, that was then. She left you with two beautiful kids to raise. It's time to move on," Slocumb explained to The Times. "It helped me become a better parent, going through the loss. I've been spiritually uplifted. There's a lot of good that came out of that. I don't know where I'd be if I hadn't taken my life to the next level."

The two had been together since their school days, and all through Slocumb's rise through the minors and debut in the majors.

When she died, he'd seen two seasons in the bigs. He went on to play in seven more major league seasons, become an all-star and be involved in a trade that, years later, would pay dividends for the team he left.

Slocumb's career began in 1984, signed by the Mets as an undrafted free agent out of John Bowne High in Flushing. Slocumb was also credited as Heath Slocumb.

Slocumb started with the Mets at short-season Little Falls and rookie Kingsport. He made single-A Peoria in 1987, after a move to the Cubs system, and then AA Charlotte and AAA Iowa in 1990.

Slocumb returned to the field for the 1993 season after his wife's death and he always kept her with him, putting her initials on his glove.

He played 30 more games that year between the Cubs and the Indians and picked up four wins and an ERA of 4.03. He arrived with the Phillies for 1994 and became a reliable regular. He picked up five wins over 52 relief appearances, with a 2.86 ERA.

In June 1995, Slocumb drew praise from his manager Jim Fregosi. He also drew the Phillies' closer position that year, saving 32 games, and made the all-star team.

"He exceeded our expectations," Fregosi told The Associated Press. "But a hard worker with an arm like his will do that."

The Phillies traded Slocumb to the Red Sox for 1996 and Slocumb saved another 31 games. He saved 17 to start 1997, then was traded again, this time to the contending Mariners.

Going the other direction in the Mariners trade were Derek Lowe and a young Jason Varitek. It was a trade often referred to as helping lead to the Red Sox' 2004 championship.

Slocumb saved 10 games for the Mariners down the stretch in 1997 and helped the squad to the playoffs.

"It's like new life," Slocumb told The Kitsap Sun as the playoffs neared that year. "Everytime I step on the mound it's playing for something."

He returned for 57 games in 1998, though saved only three games. He saw 50 relief outings between the Orioles and Cardinals in 1999 and another 65 between the Cardinals and Padres in 2000 to end his career. 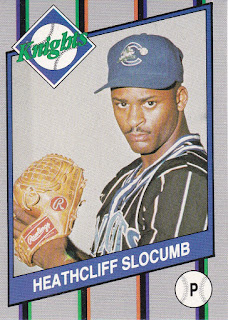