F.P. Santangelo first made the majors in 1995, with the Expos, in his seventh season as a pro.

The next year, after he'd become a major league regular, he spoke to The Palm Beach Post about finally arriving, especially with Montreal.

Santangelo went on to play in the majors over seven seasons - then return as a major league broadcaster.

Along the way, his actions late in his career later came under scrutiny as he was among the players named in the 2007 Mitchell Report. He then admitted to twice using HGH.

Santangelo's career began in 1989, taken by the Expos in the 20th round of the draft out of the University of Miami. He played his high school ball at Oak Ridge High in California.

Santangelo started with the Expos at single-A West Palm Beach and short-season Jamestown. He hit .223 in 59 games.

He then returned to West Palm Beach for 1990 and started the season on the bench, The Post wrote. He then got on the field.

"I'm sure he was afraid of his welfare," West Palm Beach manager Felipe Alou told The Post of Santangelo's lack of playing time early. "Santangelo then started showing what he could do. He earned (the playing time). We didn't give it to him."

In October 2000, Santangelo wrote a check to Kirk Radomski to purchase a human growth hormone, a check included in the Mitchell Report.

"I had to get it out, talk about it, hit it on the head and come clean," Santangelo told The Bee. "I feel like a 10-ton truck was lifted off my back. You compromise your values - when for so long I was against it- and now I can live my life without having any secrets."

After his playing career, Santangelo turned to broadcasting, first as a radio talk show host, then as a radio announcer with the Giants. By 2011, he was with the Nationals on MASN, as television color analyst. He continues in that role for 2021. 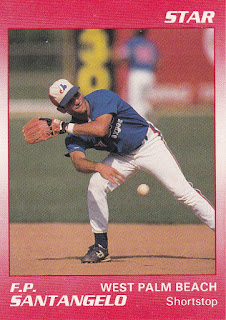