Alex Arias got his ring with the Marlins, saw 11 major league seasons; Started on train in Bronx

Alex Arias helped the 1997 Marlins win the title. But, when it came time to get his ring, he and others had already moved on.

So, he got it on an early road trip with his new team, the Phillies, a "here you go" in the dugout from the Marlins GM, he told The Camden Courier-Post.

"As long as I get it, it doesn't matter," Arias told The Courier-Post afterward. "It's a great feeling. There are a lot of Hall of Famers, a lot of players, who came through and played a lot of years and weren't lucky enough to get one. I'm pretty proud of that."

Arias' path to that ring started years earlier, in his native Bronx as he managed to learn the game and get good at it in New York City. He then went on to play in 11 major league seasons, including that 1997 championship campaign.

Arias' career began in 1987, taken by the Cubs in the third round of the draft out of George Washington High School in New York.

As a teenager in the Bronx, Arias showed promise early, but he had to take multiple trains to Brooklyn to play with an all-star team of players coached by Mel Zitter. Zitter then helped negotiate Arias' first pro contract, The South Florida Sun-Sentinel wrote.

"You have to really want to play the game," Zitter told The Sun-Sentinel of Arias in 1994, "to get up at 5 or 6 o'clock in the morning so you can ride the trains for two hours one way just to play baseball."

He made AAA Iowa for 1992 and, that May, he made Chicago. He saw 32 games with the Cubs that year and hit .293. The Cubs then traded him to the Marlins that December.

In April 1993, Arias hit a ninth-inning home run against former Cubs teammate Greg Maddux as he tried to spark a comeback, The Miami Herald wrote.

"[The homer] means a lot," Arias told The Herald. "It came against a great pitcher, a Cy Young winner. It makes you feel pretty good."

Arias then finished out his career with 70 games in 2000 with the Phillies, 70 more with the Padres and six final games with the Yankees in 2002. He ended with 775 major league games played and a career average of .265. 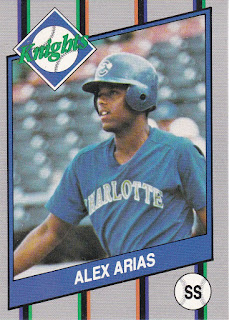