Paul Kuzniar took his command into four pro seasons, made AA in three of those

The AA New Britain Red Sox took this August 1989 game to the 15th inning and reliever Paul Kuzniar helped them get there with five scoreless, The Hartford Courant wrote.

He gave up three hits in that span and had trouble in only one frame, the 14th, but left the bases loaded, The Courant wrote.

"My control didn't seem good," Kuzniar told The Courant afterward. "But I had command of my pitches."

Kuzniar pitched in that game toward the end of his fourth professional season. He played in just one more. He topped out there at AA.

Kuzniar's career began in 1987, taken by the Indians in the second round of the previous year's June-secondary draft out of the University of Houston. He was also credited as Kooz Kuzniar.

He started with the Indians at single-A Waterloo. He went 6-6 over 51 relief appearances, with a 2.38 ERA and seven saves. He then got an invite to the Fall Instructional League.

For 1989, he started back at AA, at Canton-Akron. He saw 26 outings there. He also had some fun with his card that year, he told the site Baseball Cards Come to Life! in 2012.

He then moved mid-year to the Red Sox and AA New Britain. He saw 38 outings overall on the year and went 4-5, with eight saves.

Kuzniar returned to New Britain for 1990 and got an early medical scare as his heart started palpitating, The Courant wrote.

"I look at things a lot different now as far as my personal life, and baseball," Kuzniar told The Courant about a week later. "Life's too short to be worrying about all those little things I used to worry about." 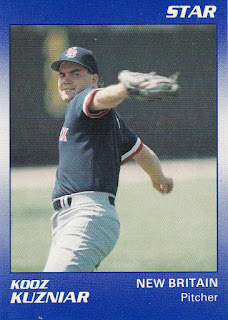