Pat Murphy saw what went on over three decades as West Palm Beach sports anchor; Got own card 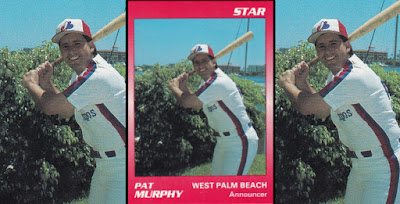 But he also had an energy level the station general manager liked - and flair, The Post wrote.

"I'm not the kind of guy to sit in the office and get my stories off the wires," Murphy told The Post. "That stuff drives me crazy. I want to get out and see what's going on; I love doing the offbeat stories."

The selection of Murphy proved to be a good one as Murphy went on to stay in the market for nearly three decades, first at WPTV and then at rival WPEC-12.

Along the way, he drew accolades, headed up his own charity golf tournament and, in 1990, got his own baseball card with the West Palm Beach Expos.

Murphy started his career in his native Wisconsin. He received his bachelor's from the University of Wisconsin-Oshkosh in 1979. He started at a station in LaCrosse in 1980, then moved to Chattanooga and, by 1984, West Palm Beach.

Murphy soon became WPTV's sports director and, according to his card, had the top rated sports program in the state in 1989.

Then came 1990 and his card. He is identified on the card as an announcer. But, as with another card for WPTV's Wayne Cunningham, it's unclear if he worked directly with the team or how the card came to be.

That year in 1990, Murphy also started his golf tournament, the Pat Murphy Pepsi Celebrity Golf Classic to benefit the local Boys and Girls Clubs. It went on to raise more than $5 million over 23 years, The Post wrote later.

He won favorite area sportscaster in 1992. By 1995, he'd moved to WPEC. In 1998, Murphy, with his "Murph's Moves" bloopers segment, won The South Florida Sun Sentinel's vote for most popular sportscaster.

"I try to make it more interesting than just reading scores," Murphy told The Sun Sentinel. "Sports is entertainment and I treat it that way. I think the audience likes to see me having fun with it."

In 2001, his time in West Palm Beach earned him induction into the Palm Beach County Sports Hall of Fame.

Murphy stayed at WPEC until his retirement in 2013. Upon his retirement, Murphy recalled to The Post never thinking he'd stay in one place so long.

“But it’s a great place to live," he told The Post. "I fell in love with it pretty quickly. Oh, sure, I had visions of grandeur about going nationally, and there were opportunities to go other places. But this became home. I carved out a nice niche. The viewers have been supportive, and viewers are everything." 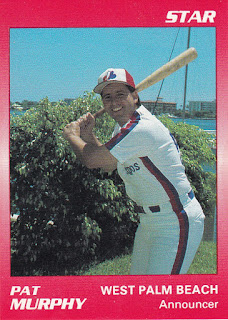