Originally published March 31, 2016
John Valentin finished it in this June 1996 game with a double - after starting with a home run, triple and a single.

Valentin hit for the cycle, the 14th Red Sox player to do it, The Associated Press wrote.

"I was looking for a good ball to hit, trying to be aggressive," Valentin told The AP afterward, "but to be honest with you I didn't think I'd ever accomplish this fete."

Valentin hit for the cycle in 1996 in in his fifth major league season. He went on to play in 11 major league campaigns, hitting .279 on his career and knocking 124 home runs.

Valentin's career began in 1988, taken by the Red Sox in the fifth round of the draft out of Seton Hall University.

Valentin started at short-season Elmira, then hit single-A Lynchburg and Winter Haven in 1989. He made AA New Britain in 1990, then AAA Pawtucket in 1991.

In July 1994, Valentin played shortstop and turned in that unassisted triple play - the 10th in all of major league history. He caught a line drive, stepped on second and tagged the runner from first.

"The guy didn't run, so I thought there was one out," Valentin told The AP afterward. "I looked up to see the board and realized there was nobody out. So I tagged him."

At the plate that year, Valentin hit .316. He continued to be a Red Sox regular infielder through 1999, just not necessarily at shortstop. The Red Sox moved him to second base to start 1997, a move Valentin didn't like. He then moved to third later that year and for 1998 and 1999.

Injuries limited his 2000 and 2001 seasons, but he returned for one final full season in 2002 with the Mets. He hit a game-winning double in a rare start for the Mets that July.

"I know my name is most likely not going to be in the lineup, so I take an approach that prepares me for a situation from the fifth inning on," Valentin told The AP afterward. "It's so different. I've gotten so used to coming in and getting that one at-bat, you have to adjust your thinking."

Valentin played his final games in 2002. He's since continued on in the game as a coach. He's coached and managed in the minors and coached three years with the Dodgers as an assistant in Los Angeles. For 2016, he's serving as hitting coach at single-A Great Lakes. 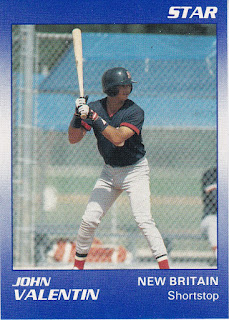