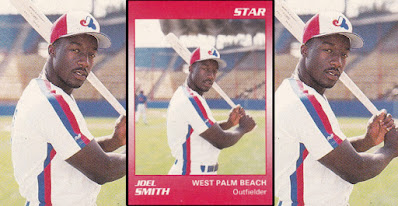 The University of Tennessee baseball team had some fresh faces to start 1987 and one of their new additions came in the form of a speedy Middle Georgia Junior College transfer, Joel Smith, The Kingsport Times-News wrote.

Smith's resume included being clocked at 4.3 in the 40, The Times-News wrote.

"He's the fastest player we've ever had at Tennessee, without question," Tennessee head coach John Whited told The Times-News that February.

Smith went on from Tennessee that summer to turn pro with the Athletics. His pro career lasted four seasons. He topped out at high-A.

Smith's career began that year in 1987, taken by the Athletics in the seventh round of the draft out of Tennessee.

At Tennessee, he doubled and scored in an April game. He then went 2 for 4 in a May contest.

With the Athletics, Smith started at short-season Medford. He hit .230 in 40 games, with 10 stolen bases.

Smith arrived at high-A West Palm Beach for 1990. He singled and stole a base in an April game. Overall, he hit .203 in 52 games to end his career.

Smith later stayed in the game as a scout. In 2002, Smith signed Jeremy Hermida as a scout for the Marlins. 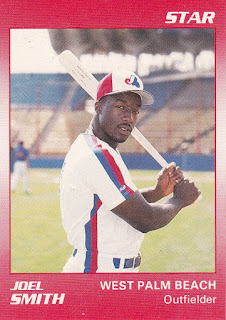