Bret Davis threw enough strikes to make it from college to the pros; Saw four seasons, made AAA

Florida State relief pitcher Bret Davis had to take over in the third inning of this May 1988 game and eventually went more than four innings and picked up the win, The Orlando Sentinel wrote.

Afterward, Davis explained his approach to The Sentinel.

"My game is throwing strikes," Davis told The Sentinel. "If I do that, I'm okay."

Davis eventually threw enough strikes to make it from college to the pros. His pro career lasted four seasons. He made AAA.

Davis' career began in 1988, signed by the Expos out of Florida State.

A couple days after his win in relief, Davis threw another five innings of relief while giving up one run.

With the Expos, Davis started at short-season Jamestown. He saw 18 relief appearances, picked up three wins and three saves.

Davis arrived at high-A West Palm Beach for 1990. He threw two perfect innings in a May game and his eighth save in August to help his team clinch a playoff spot. He got into 43 games overall, with a 3.29 ERA. 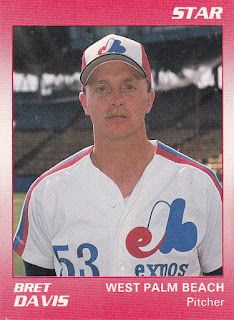