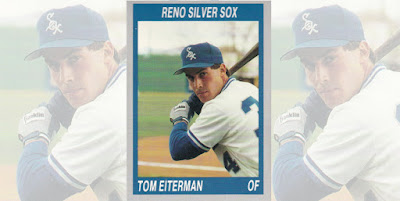 The Reno Gazette-Journal described Reno outfielder Tom Eiterman as quiet, despite showing himself to be one of the best hitters in the league.

Eiterman credited his coaches in college, The Gazette-Journal wrote.

"They taught me that baseball is a very up-and-down game," Eiterman told The Gazette-Journal in July 1990. "One night you can be 0-for-3 and you'll go 4-for-5 the next. You can't let those highs and lows affect what you do. You have to concentrate the same way all the time."

Eiterman concentrated that year in his second year as a pro. He went on to see two more campaigns. He topped out at AA.

Eiterman's career began in 1989, signed by the Indians as an undrafted free agent out of Ohio State University.

Eiterman made Ohio State co-captain in 1989. That May, he worked to get his team into the Big Ten tournament, despite long odds, according to The Ohio State University Lantern.

"We definitely have to win three now," Eiterman told The Lantern after a doubleheader loss. "In order to do that, everybody on the team has got to pick themselves up. I know we can win three against Michigan State, though."

Eiterman started with the Indians in the rookie Gulf Coast League. He hit .324 in 40 games there. He moved to high-A Reno for 1990. He hit .332 with eight home runs at Reno, taking the batting title.

That April, he knocked in two runs on a triple, The Gazette-Journal wrote.

"I couldn't have gotten a better pitch to hit," Eiterman told The Gazette-Journal afterward. "The ball was outside and up. It was a good pitch to drive the other way." 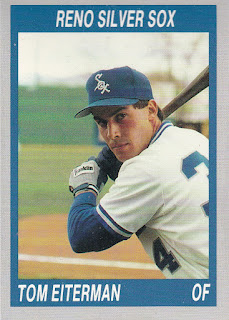