Originally published Dec. 5, 2011; Updated December 2020
Randy Knorr didn't play every day. But when he did play, he was ready.

It was his work with the Nationals minor leaguers that got Knorr a spot as Nationals bench coach for 2012. The Washington Times wrote that Knorr would also be on the short list to succeed Davey Johnson as Nationals manager.

"I think that [experience in the system] probably put me on the top of the list because I have had [those players] and have a good relationship with most of them," Knorr told The Times. "I feel like I can get the most out of them."
He continued on as bench coach and then as senior baseball advisor for the Nationals through 2017. He then served as manager at AAA Syracuse in 2018, then AAA Fresno in 2019. 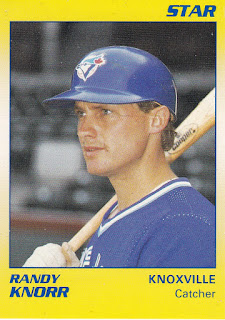