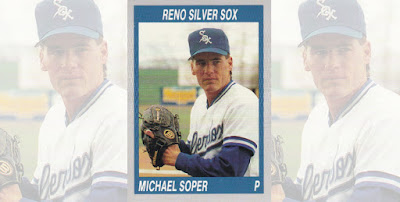 Mike Soper led the minors in saves in early August 1991 at high-A Kinston and he tried to explain to The Akron Beacon Journal how he did it.

First the team was winning and Soper happened to be the pitcher closing the door. Second, the infielders behind him also helped, given how he pitched, he told The Beacon Journal.

"I am a sinkerball pitcher," Soper told The Beacon Journal as he'd amassed 34 saves. "I just concentrate on throwing strikes and try to get groundouts."

Soper ended that year with 41 saves at Kinston. He went on to count a total of 102 saves over his five-season pro career. Despite the saves, though, Soper never made the bigs. He topped out at AAA.

Soper's career began in 1989, taken by the Indians in the 37th round of the draft out of the University of Alabama. He went to Alabama out of Saugus High School in Massachusetts.

With the Indians, he started in the rookie Gulf Coast League. He went 5-2 over 32 relief appearances, with a 1.05 ERA.

He then played 1990 between high-A Reno and AA Canton-Akron. He blew one save at Reno that May, but came back to convert another a few days later, The Reno Gazette-Journal wrote.

"Short relievers have a rough life," Soper told The Gazette-Journal. "It's the starters that have it easy."

He then played his final season as a pro in 1998, eight relief appearances back at Canton-Akron, but a back injury hit and ended his season. He then played 1994 in Mexico, marking the end of his career. 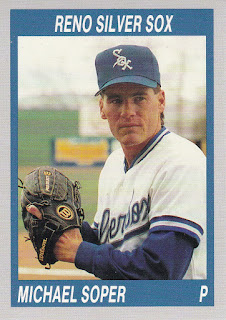