Matt Stairs thought about moving on, then made the next 15 major league seasons 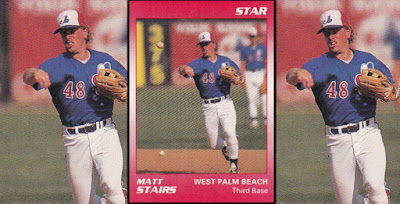 In his eighth pro season in 1996, Matt Stairs had seen brief major league appearances with both the Expos and Red Sox, but he found himself again at AAA, this time with the Athletics, The Montreal Gazette wrote in 1999.

He also found himself thinking about moving on, he told The Gazette then.

"It was a combination of sunstroke, a late night of being tired, so I put my eyes up and my arms down," Stairs told The Gazette. "I lowered my hands and it worked out well."

With a new hitting approach, Stairs soon found himself back in the majors. He then hardly left over the next 15 seasons.

By the time he was done, he'd seen time in 19 big league campaigns, gotten into nearly 1,900 major league games and hit a pivotal 2008 pinch-hit postseason home run for the Phillies on their march to that year's World Series title.

Stairs' career began in 1989, signed by the Expos as an undrafted free agent out of his native New Brunswick.

Stairs started with the Expos between single-A Rockford and West Palm Beach and short-season Jamestown. He hit .244 between them over 94 games.

He then returned to West Palm Beach and moved to AA Jacksonville for 1990. He hit .287 over the season.

Early on, Stairs worked on his defense and making difficult plays, he told The Gazette that July.

"I'm happy with the hitting though," Stairs told The Gazette. "They say if you can hit and play some defense, then they'll find a place for you to play."

Stairs debuted in Montreal in May 1992. He saw 13 games that year and eight more the next. He also saw time in Japan in 1993, with Chunichi.

From then on, 1997 through 2008, Stairs never saw less than 107 major league games in a season. He played with the Athletics through 2000, then the Cubs, Brewers and Pirates through 2003 and the Royals, Rangers, Tigers and Blue Jays into late 2008.

Just before the deadline in 2008, the Blue Jays sent Stairs to the Phillies. He played in 16 games down the stretch and then hit an eighth-inning, pinch-hit home run to give Philadelphia a 7-5 lead in a game they won, for a 3-1 series advantage.

"I hadn't had an at-bat in like eight days, but when you get in a zone, you see the ball well and everything is quiet. Your head is quiet, your body is quiet, your hands are alive," Stairs recalled to NBC Sports Philadelphia years later. "He made a mistake. He wanted a 3-1 fastball away. He pulled it a little bit and the rest is history."

Stairs continued with Philadelphia in 2009, then played 78 games with the Padres in 2010 and closed out his career with 56 final games with the Nationals in 2011.

He ended his career with 1,895 major league games played, a career average of .262 and 265 total major league home runs.

He then served as a hitting coach with the Phillies in 2017 and then the Padres in 2018. 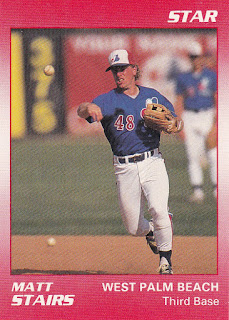