Marianne Carlisle wanted to be a mascot since age 6; As a theater major, she became Willie P. Bananas 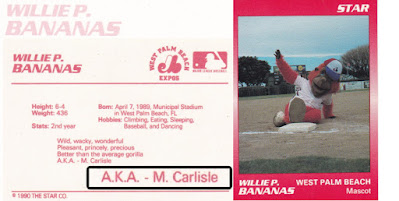 When Marianne Carlisle was 6 years old, she told her grandfather the two things she wanted to do: Ride in a horse-drawn carriage and be a mascot, she recalled to The Palm Beach Post in April 1989.

She recounted that story years later as she interviewed to realize that second wish, be a mascot for the West Palm Beach Expos. That story got her hired on the spot, West Palm Beach general manager Rob Rabenecker told The Post then.

"None of them exhibited the enthusiasm she did," Rabenecker told The Post of Carlisle. "She's been just great with the kids. We couldn't have made a better choice."

Carlisle took the job as a 21-year-old theater major at Palm Beach Community College, who later transferred to the University of South Florida.

She ultimately spent four seasons as the mascot. She then went on to several plays and turn high school drama teacher.

Carlisle started as Willie and had success quickly. She also had the unique honor of not only seeing her work included in the team's baseball card set, but also being identified by name, at least partially, on the card back.

Included after the description of Willie as "Better than the average gorilla" is the line "A.K.A. - M. Carlisle," or Marianne Carlisle.

In her first season in the gorilla suit, Carlisle got to travel to the Florida State League All-Star game - and  she got ejected from a game.

First, in late June, The Post called her "one of the hardest working people" at the league All-Star contest.

Then, in July, Carlisle, as Willie, got ejected from a game after taunting an umpire over a controversial call with glasses.

She spoke about the incident years later to The Post, recalling the umpire talking to her like she was a person, telling her to get out of there.

"The people were cheering, but a lot of my vision was blocked, so I couldn't always see what was going on," Carlisle recalled to The Post in 2003. "I hear them cheering, but as I get back on top of the dugout, they start going nuts, booing. The assistant manager, Jay Darnell, says, 'Willie, you've just been kicked out of the game.'"

Carlisle continued as Willie through the 1992 season. She then continued on with acting. In June 1994, she graduated from the Bert Reynolds Institute for Theatre Training and The Post noted her background as Willie.

Her work at the institute also got mentioned in some Post theater reviews, including a positive review for a July 1994 performance of a play called "Chicks."

She later became a high school drama teacher and then went into a new field, as a speech and language pathologist. She made the move precisely due to her background in theater and voice, she wrote on her LinkedIn page. 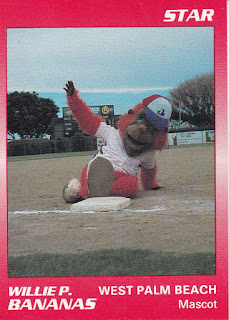