Jerry Maldonado earned Bronze Star in Vietnam, served as teacher and, for a time, with hometown baseball team

Jerry Maldonado already had an impressive resume by 1992. He'd served in Vietnam with anti-terrorism unites and earned a Bronze Star. He'd also taken on another important job, as a teacher to at-risk students in his hometown of Sparks, Nevada.

But, in 1992, he sought another job, as a United States Congressman.

"The working Nevadan needs someone in Washington, D.C. who is willing to think for themselves," Maldonado, a Democrat, said in a statement as he announced his candidacy that January, according to The Associated Press.

Maldonado ultimately fell short in the primary, but he continued on as a teacher until his passing in 2008 at the age of 60.

Maldonado's path to that Congressional run, to the Army, and to teaching also included forays into sports, in high school and college and later with the Reno Silver Sox, as an administrative assistant and assistant general manager.

That path began in Sparks, just outside of Reno. He graduated from Sparks High School and played Connie Mack baseball. He homered in one June 1964 contest.

He went on to the University of Nevada, Reno, where he played both baseball and basketball. He averaged 6.8 points per game on the school's freshman team, according to The Nevada State Journal.

"Maldonado earned a reputation as a team player during his prep career and his one season in a Nevada uniform," The State Journal wrote in December 1966 as his sophomore campaign got underway.

Then came the Army. He joined the ROTC program at Nevada and graduated as a 2nd Lieutenant. He served 14 years, including with the 82nd Airborne and Delta Force, as well as others. He retired with the rank of Major, according to his obituary.

Maldonado spent at least two seasons with the Silver Sox, 1989 and 1990. He got his own baseball cards both years. He worked as an administrative assistant in 1989, covering advertising sales and the concession stand. He moved up to assistant GM in 1990.

His career in education spanned 19 years. He taught special education, including chronic and terminally ill students.

In 2005, he made another run at public office, as he interviewed for a Sparks City Council seat, according to The Reno Gazette-Journal.

"I'd like to give back what the city has given me growing up," Maldonado told the council, according to The Gazette-Journal. 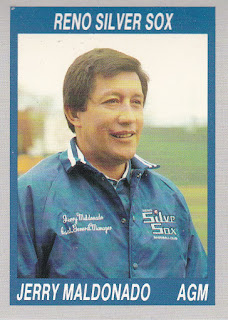