New Reno Silver Sox general manager Jack Patton knew he and his manager had a daunting task for 1989: As an independent in the single-A California League, they needed to build a competitive team from scratch.

Late that May, as his team went through a rough patch, Patton spoke to The Reno Gazette-Journal about the process.

"You need guys who aren't going to be satisfied to be here all season," Patton told The Gazette-Journal.

Patton's efforts that season, his first as a general manager, ultimately won him league executive of the year.

Patton's path in the minors arrived at Reno from Bakersfield, then went on through Riverside, Ca., and then to Bakersfield again.

Patton started at Brigham Young University, where he graduated in 1982 with a bachelor's degree in communications.

He arrived at single-A Bakersfield in 1985 and, in his fourth season there in 1988, had become the club's assistant general manager. He joined his father Lowell Patton there. His father purchased the club in 1984 and kept it until 2004.

At Reno in 1989, Patton joined the club as both general manager and part owner. That August, he and field manager Eli Grba were receiving credit for making Reno a success, The Gazette-Journal wrote.

"You do the best you can to evaluate talent, but in the end a lot of it depends on luck," Patton told The Gazette-Journal. "You don't know about a player until he's out there playing for real."

Patton continued in Reno through 1992, when he pulled up and moved the team to Riverside over ballpark issues. But his team ran into a rocky first year at the gate and stayed in Riverside only three seasons.

By 1995, though, Patton was back in Bakersfield as general manager. In June 1997, he spoke with The San Francisco Examiner about ballpark issues in Bakersfield, at Bakersfield's historic Sam Lynn Ballpark.

"Minor league baseball has grown so much in popularity that the have-nots are coveting the haves," Patton told The Examiner. "The haves had better do something. It doesn't always have to be in the form of a brand-new stadium, but at least working to improve what they have." 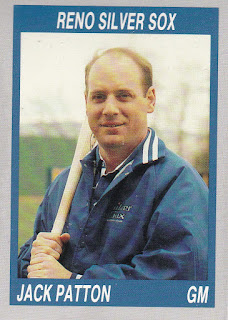