Scouts saw it, too, Elam told The Post-Dispatch.

"They know he's not even close to his potential," Elam told The Post-Dispatch. "He's got a live arm, and it's a young arm because he's only been pitching for about three years."

Elam spoke after the Mets had selected Clark second overall in that January's draft. He didn't sign then, but he eventually did with the Phillies. His pro career lasted four seasons. He topped out at high-A.

Clark's pro career began in 1987, signed by the Phillies as an undrafted free agent out of Forest Park Community College and Oral Roberts University.

Clark started with the Phillies at single-A Clearwater and Spartanburg. He went 3-5 over 12 starts at Clearwater, with a 4.15 ERA. He also saw six relief outings at Spartanburg.

"He's been doing an outstanding job since he got here," Reno manager Eli Grba told The Gazette-Journal referencing Clark's arrival two weeks earlier. "If he keeps that up we'll have to put him in the rotation. But it's nice having a guy like that in the bullpen."

Clark stayed with Reno for 1990. He took a last-minute start in June to a win, despite giving up an early grand slam, The Gazette-Journal wrote.

"After that inning, I just concentrated on keeping the ball down low," Clark told The Gazette-Journal of his early trouble. "I was throwing the sinker and I let the infielders do all the work." 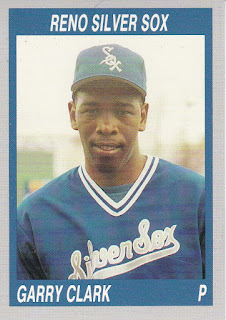