Eddie Gonzalez had seen parts of three minor league seasons by spring 1990, but an injured wrist meant he hadn't seen the field in a year and a half, The South Florida Sun-Sentinel wrote.

But, after an introduction to Expos officials at the Caribbean Baseball Series in his native Miami, he won an invitation to an Expos tryout, The Sun-Sentinel wrote.

"I've got tools. I know I've got tools," Gonzalez told The Sun-Sentinel then. "My power and arm are above average, so I'm out here again."

Gonzalez' performance at the tryout ultimately won him a slot on the Expos' high-A team at West Palm Beach. His stay, however, was short-lived. His return - and his baseball career - ended by late June.

Gonzalez' career began in 1986, signed by the Yankees out of Florida International University. Gonzalez  was also credited as Ed Gonzalez and Eduardo Gonzalez.

At Florida International, Gonzalez hit two home runs, one a grand slam, in a March 1986 win. He hit a two-run double in another contest.

He started with the Yankees in the rookie Gulf  Coast League. He hit .266 in 58 games, with nine home runs.

He then returned for five games at single-A Prince William in 1987, then spent the rest of the year at independent single-A San Jose. He tied a July game for San Jose with a two-run home run.

Gonzalez signed with the Dodgers for 1988 and played at single-A Vero Beach in the Florida State League. He saw 32 games and hit .207.

Upon his return in 1990, Gonzalez saw the Florida State League again, this time at West Palm Beach. He picked up an RBI in an April game and a solo home run in a May contest. Then, in June, hitting just .084 total, Gonzalez retired.

Gonzalez does, however, appear to have returned briefly in 1995, for independent Pueblo. He hit .281 in 37 games to end his career. 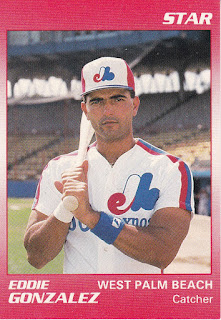