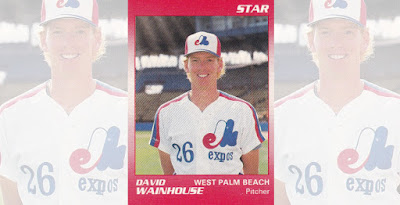 Dave Wainhouse had a difficult 1995 season. After seeing five previous major league appearances in six pro seasons, including an injury year, he played 1995 back in the minors and turned in a 5.77 ERA.

"Last year was a rough year. I really struggled," Wainhouse told The Pittsburgh Post-Gazette upon his return. "But I was going to give it one more shot and see what happened."

What happened turned out to be five more seasons with time in the majors, for time in seven total.

Wainhouse's career began in 1988, taken by the Expos 19th overall out of Washington State University. He was born in Toronto, but grew up near Seattle.

It also came as a surprise as Wainhouse had expected to be selected lower down, maybe in the seventh or eighth round, he told The Spokane Spokesman-Review.

"I'm kind of shocked," Wainhouse told The Spokesman-Review. "I'm excited, that's for sure."

Wainhouse signed, but before doing so, he appeared for the country where he was born in the Olympics as a member of the Canadian Olympic baseball team in Seoul.

Wainhouse made AA Jacksonville for half of 1990 and then AAA Indianapolis and Montreal in 1991.

His debut for the Expos came in August. He saw two games and gave up two earned over 2.2 innings of work.

He played 1992 back at AAA, then moved to his hometown Mariners for 1993. He played at AAA Calgary. He saw three relief outings for the Mariners and gave up seven earned.

Wainhouse then lost 1994 to injury and had that 1995 campaign in the minors. His return to the majors with the Pirates in 1996 turned into 17 appearances.

His career then rounded out with nine final big league appearances in 2000 with the Cardinals.

He's since spent time as pitching coach at Seattle University, hired there in 2008. His son, Joe Wainhouse, has also played baseball in college, at Washington.

He's also served as a private pitching tutor. In 2007, he spoke to his hometown Seattle Post-Intelligencer and assessed his 13-season professional career.

"That's why I'm working with kids now," Wainhouse, then a private pitching tutor, told The Post-Intelligencer. "There's nothing these guys can go through that I haven't gone through." 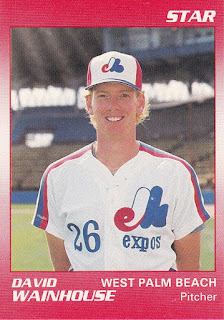