Carlos Mota, catcher at independent Bangor, earned high praise from his manager Roger LaFrancois in June 1997, according to The Bangor Daily News.

Mota took pride in his defense, called a good game and had a good arm, LaFrancois, a former AAA coach, told The Daily News.

Mota received that praise in his 10th season as a pro, having already seen AAA briefly twice before. He played in two more campaigns after that, both in independent ball. He never made the majors.

Mota's career began in 1987, signed by the Indians out of his native Dominican Republic.

Mota played 1989 largely at short-season Watertown, then 1990 at high-A Reno. He also saw eight games that year at AA Canton-Akron.

In June 1990, he spoke to The Reno Gazette-Journal about playing ball in the winter with major leaguers like Pedro Guerrero and learning from them.

"I hope to be up there in the majors with them, someday," Mota told The Gazette-Journal. "They are always ready to give me advice and help me with my game. That's almost as good as being able to play with them."

Mota played 1991 at high-A Kinston, then 1992 back at Canton-Akron. He also saw eight games at AAA Colorado Springs. He went 7 for 30 there.

He played one more season in the Indians organization, 1993, between Canton-Akron and AAA Charlotte. He saw 49 total games and hit .266.

Mota has since continued on the field as a manger for the Yankees' Dominican Summer League team from 2010 to 2014. 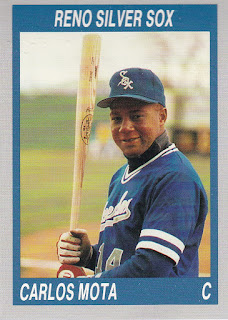