Bill Wertz not only got to make his major league debut in this May 1993 game, but he got to make it in his hometown.

A Cleveland native, Wertz came out of the bullpen for the Indians and his family and friends got to see it in person, The Akron Beacon-Journal wrote.

"I was pleased with his velocity and he had a good breaking pitch," Indians manager Mike Hargrove told The Beacon-Journal afterward. "For his first time out, pitching in his hometown with his folks watching, he did well."

Wertz went five outs and gave up one earned in that outing. He went on to see 34 total with the Indians that year. He played in one more big league game the next year to round out his major league career.

Wertz' career began in 1989, taken by the Indians in the 31st round of the draft out of Ohio State. Wertz was also credited by his full name, William Wertz.

Wertz went 2.1 innings of no-hit relief in a May 1992 game at Canton-Akron and drew praise from his manager Brian Graham, according to The Beacon-Journal.

Going into 1994, Wertz hoped to start the season with the big club, but he got sent down after a couple poor spring outings, The Beacon-Journal wrote.

"I would like to have shown more than I did. But I also would have thought that the job I did last year warranted a longer look," Wertz told The Beacon-Journal.

Instead, Wertz returned to the bigs in May, but for just one final game.

He then continued playing in the minors through 1997. He went through AAA with the Red Sox and Mariners. He then spent his final time back with the Indians at Canton-Akron. 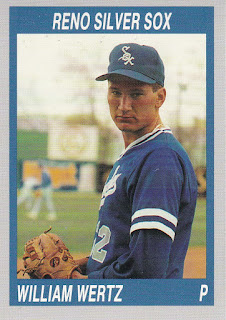