Only, the Silver Sox needed someone to do some other jobs, too, General Manager Jack Patton told The Gazette-Journal.

"He contacted me," Patton explained to The Gazette-Journal in February 1989. "I told him he could have the job if he was willing to sell, produce and raise money so the club wouldn't have to subsidize anything. I've listened to some of his tapes. He sounds top-notch to me."

Karli then was just two years out of college himself, but he's since added many tapes to his resume, first in sports, then in news.

After a brief career as a radio announcer, Karli then moved into local TV, first serving as a sportscaster, then as a full station news director and managing editor. He continues as a managing editor at a station in Maryland in 2020.

Karli's career began in California, out of San Pedro High School. There, his involvement in sports included playing. He served as a reserve guard on the school's basketball team and hit a game-winner in December 1981, The San Pedro News-Pilot wrote.

He then went on to attend and graduate from USC, with a degree in sports information. After a stint at Western New Mexico State, he arrived in Reno in 1989.

He then took on radio duties for the short-lived Bakersfield Jammers of the CBA in November 1991. After that team folded, Karli spoke to The Gazette-Journal about his future, including whether he'd be back in Reno for 1992.

"I'd consider it, just to stay in the game," Karli told The Gazette-Journal about returning to Reno. "But I might also pursue TV once again. Everything is up in the air."

Karli soon did pursue TV again, and in Bakersfield. In 1996, he served as a sportscaster at Bakersfield's KERO, as well as on radio, the year he married his wife Jackie, herself a TV news anchorwoman.

By 2003, he was the TV station's news director, at a news directors association meeting, speaking to The Salt Lake Tribune as he picked up ideas on how to make meteorologist segments hook viewers when weather is pretty consistent.

"That's why I'm here," Karli told The Tribune. "I don't have the answers."

By 2016, both Todd Karli and his wife Jackie had made their way cross-country to WBOC News, on the Delmarva Peninsula. Delmarva Life interviewed the pair that August.

Upon his departure from Bakersfield after 20 years, fellow anchor Todd Callahan wrote of Todd Karli's impact at the station.

"Todd was the news man who's delivered the stories at the 23ABC desk for so many years and helped 23ABC to the station it is today," Callahan wrote.

The Karlis continue at WBOC as managing editor and broadcast journalist in 2020. 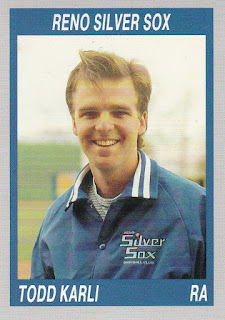