Milt Harper worked to win over decade as pro, made AA, Taiwan; Died in Taiwan in 1993 at age 31

Even though it was only a spring training game, Milt Harper's walk-off single for his Cleveland Indians still saw Harper's teammates celebrate, The Arizona Daily Star wrote.

Harper explained the celebration afterward to The Daily Star.

"You try to win all games no matter what," Harper told The Daily Star.

Harper helped win enough games in his career to get him to AA, but not higher. His playing ability, however, eventually got him overseas, to three seasons in Taiwan.

His time in Taiwan, however, ultimately ended in his death at the age of 31.

Harper's career began in 1984, signed by the Indians as an undrafted free agent out of California, after only having picked up the game his senior year in high school.

Harper started with the Indians at single-A Waterloo. He hit .278 in 110 games. He returned to Waterloo and got a look at AA Waterbury for 1985 and saw Waterbury again for 1986. He hit .223 in 50 games there, his season cut short by an elbow injury that required surgery.

He played at single-A Kinston for 1987, where he hit 20 home runs, then got his spring look with the Indians for 1988. His work that spring drew praise from manager Doc Edwards, according to The Associated Press.

"He is really a good-looking first baseman," Edwards told The AP. "And the thing I like about him offensively is that he's a guy who can hit for power, a high average and still draws a lot of walks."

Then, on Oct. 16, 1993, he fell to his death from a Taiwan high rise. Harper's death was initially ruled a suicide, but witnesses later told police they'd heard an argument, according to The Reno Gazette-Journal, citing USA Today's Baseball Weekly.

Some accusations were brought in his death, but a man initially accused had been cleared by April 1994, according to The San Bernardino County Sun.

After Harper's passing, The Gazette-Journal noted Harper signed on with Reno in 1989 and, in 1990, he'd been voted by fans most popular player. The club's then general manager Jack Patton also recalled Harper's work.

"Milt Harper was the best player to ever play for me," Patton told The Gazette-Journal. 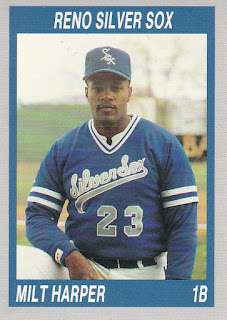