Lonnie Keeter did a lot of positive talking over his career, from playing to coaching to English class

As the 1991 season came to an end, High Desert Mavericks hitting coach Lonnie Keeter recounted to The San Bernardino Sun how he worked with his hitters that year.

He worked to make some changes in his hitters' swings, including hitter Jay Gainer, but he also worked to talk them up, he told The Sun.

"There's a lot of positive talking," Keeter told The Sun. "(Gainer) might strike out, but I find the good things they do."

After years as a coach in college and in the pros, Keeter made his own changes after that season,  but one where he also could work to make a difference. Keeter, who grew up in Oregon, ended up settling locally to that High Desert team and he became a teacher and later a school principal.

Keeter's baseball career began in 1968, taken by the Red Sox in the 18th round of the draft out of Portland's Douglas High School.

He started with the Red Sox at single-A Winter Haven. He hit .289 in 72 games. He then continued at single-A for the club through 1971. He played his final season in 1972 with the Rangers at single-A Greenville.

Keeter soon returned home to Oregon and turned to coaching. In summer 1977, he served as coach for an American Legion team in Corvallis. He also served as an English teacher there.

"Hopefully, we put a little respect for us into teams from the (WAC's) South," Keeter told The Daily Utah Chronicle afterward. "We can play the game of baseball."

"I want to personally thank the Victor Valley Union High School District for giving me an opportunity to be an administrator," Keeter told The Daily Press then, "and hopefully I have been a positive influence to students and staff." 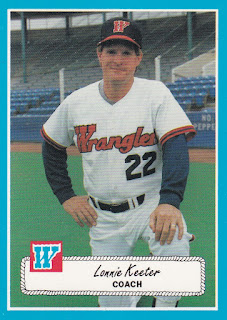